HomeArticlesStoriesA Motorcycle High Side Is Born

"Your Vault Was Splendid But You Screwed Up The Landing"

Having ridden my 1980 Suzuki GS850G for a couple of years, I developed a sort of "horsepower lust". Toward the end of 2007, I finally made the move to a 1991 GSX1100G. Now, you might not be familiar with this particular model. It's a sport touring machine that shares the first generation's GSXR1100 motor. Said motor was retuned to distribute more power at lower RPMs. These things are torque monsters, juggernauts that will get an inexperienced rider into a lot of trouble fast. I didn't consider myself to be an inexperienced rider per say but perhaps I was mistaken.

“I entered a routine ninety degree left hander with too much speed. I then added too much rear brake and a high side was born.”

The 2008 Brown County, Indiana rally took place during the second weekend of May. My friend Jeff and I were going come Hell or High water. High water it was. Jeff rode from Memphis and met me on Thursday before we both headed to the Rally site in Columbus, Indiana. We departed in a light rain that got steadily worse over the course of our ride.

By the time we cleared Louisville, Kentucky we'd been riding in monsoon conditions for over a hundred miles. Finally making it to Columbus, we had to ask for towels before checking into the motel. I'm sure they preferred that over a fresh sheen of road slush on their floors. 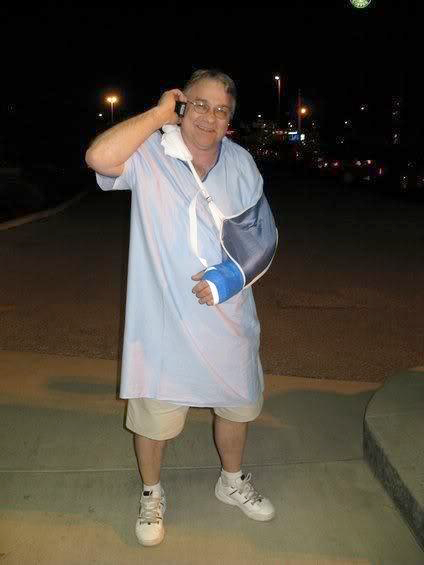 Friday dawned beautifully and the early bird group headed out for a spirited ride through the splendid curves and hills of Southern Indiana. We stopped for lunch at the Overlook Restaurant on the Ohio River before continuing on. The GSX1100G is a heavy but powerful bike. I was riding well, horsing the beast through curves and powering out with a rush. Then it happened. I entered a routine ninety degree left hander with too much speed. I then added too much rear brake and a high side was born. I was bucked off and the bike went down hard. Joe was ahead of me and saw it in his rear view mirror, stating that my vault was "splendid" but that I'd "screwed up the landing".

In the end, my full gear delivered bumps, bruises and a broken left wrist that required surgery, all of which earned me another "That Guy" award. This was one of those events where I ignored multiple signs that this ride wasn't to be. These days, if I don't feel it, I go back home.

Does Frank Sinatra's "Fly Me To The Moon" Mean Something Entirely Different To You?

Riding's never without it's hazards. What unexpected encounters have you survived? How did the ordeal conclude itself? Your input is invited. Leave a comment! 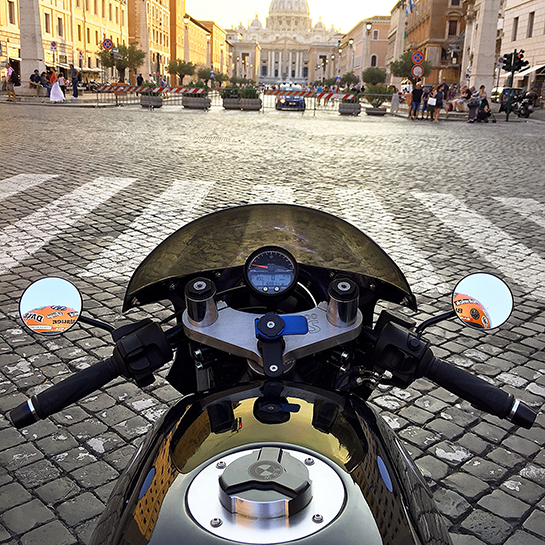 Which fairing do you have on your Gsx1100g. I've been looking for a good looking fairing and like the one in the picture very much

I'm just chiming in to take responsibility for the image you're referring to above. That photo isn't of Scott's 1100. Scott was kind enough to tell his story but didn't have any photos to include in this post, so I scoured Wiki images for something licensed for public use.

The problem with finding plastics is an article I'm personally interested in writing up. Send us an email through the Q&A -> Contact form, providing your motorcycle's year/make/model and headlight assembly so that I might try and document the resources and pitfalls of finding the plastics any given rider is after!