HomeArticlesTouringMapsUSANebraskaDes Moines To Kearney By Motorcycle

4am? Ugh. I need the bathroom.

Whatever. I feel pretty good. Let's sit up, meditate for twenty minutes and get moving slightly ahead of schedule.

On goes the coffee maker as I prepare and pack my gear for the day. Travis Franken-wakes, staring at the edge of his bed with that "in-depth" look that can only mean zero cognition. My stomach's beginning to growl and the physical strain of yesterday's ride is apparent. Fortunately, I'm too happy to notice. To fake a grimace would be comedic. I'm traveling the United States on a sport touring motorcycle!

“Completely obliterating our initial route, we decide the open scenery of 92 West to be preferable. While there, we visit John Wayne's birthplace.”

Our first words observe that there's intermittent rain. The bikes look cleaner and the pavement has a sheen to it. At the Perkins next door, we sit and mumble our breakfast orders before verbally documenting yesterday's events to my smartphone. Travis's plate arrives complete with a short stack of ham ... total overkill but apparently very tasty. I'm proud to see that my omelette selection skims the boundaries of "healthy".

Fully fed and psyched for what may be a very wet ride, we prepare to hit the road. The housekeeping staff at the Des Moines Motel 6 are fantastic, going out of their way to offer up "burner" towels to wipe off our seats. One of the ladies rides pillion with her husband regularly, so she knows the score.

We completely obliterate our initial route, preferring the open scenery of 92 West.

By some fluke, we find ourselves visiting John Wayne's birthplace. Photos don't do that van justice. Travis posts a photo of The Duke's statue to Facebook. Courtesy of his smartphone's voice recognition software, the caption remains "Dike's Birthplace" until we can get to a computer to correct it. The kicker is that he tags me in the pic, so who knows what alerts are waiting for me at our next stop.

Before moving on, I tell Travitron about his waterproof saddlebag covers being torn from flapping in the wind. Our solution is to fold, crease and tape the excess plastic before placing elastic cargo nets over each. This works exceptionally well (and also looks pretty cool).

Back in motion, we see "Travis's Merchant of Venice" (a roadside shop of some kind) and decide NOT to stop out of concern for the Shakespearian debate. Having never heard of the play, Travis explains to me that the work hints of anti-semitic opinions. While seeing his name on a storefront makes for a funny photo op, this one's probably better left behind.

Besides, originally misreading the sign to say "Travis: Merchant of Menace", the store's real name isn't nearly as rock star.

Rolling into Omaha, the sun comes out and we ditch our rain gear. For your viewing pleasure, I make sure to get a photo of Travis changing clothes in a gas station parking lot. Such media may prove useful in public service announcements.

The ride continues along Nebraska 92, the same route that we picked up towards the Iowa border. Our pace is steady, cruising between 75-80 mph. We're stopping more today than yesterday, however. Barely into day two, our coordination of fatigue, restroom and snack breaks could use some streamlining. We're still finding our flow.

Passing through the bizarrely named town of Wahoo, we find that gaps between societal hubs are growing longer. Every grain silo on the horizon, usually miles apart, represents a turn. It's the world's largest game of pinball and silos are the bumpers.

Route 92 proves to be as scenic as we expect. Of course, the Iowa-Nebraska transition is completely flat and unidirectional but deviating from the expressway provides an open view. There's room to breathe with opportunities for introspection. Such depth never takes hold, however because I'm too busy harassing Travis with shallow perspectives regarding the female form. A full day without my wife and my capacity for complex thought is completely abandoned.

Then, in the middle of Nebraska, Rising City to be exact, we see a gas station. It's desolate here. There's thirty miles of nothing in both directions. Travis hits a bump and his entire bike drops a few inches. I see his subframe sidewinding but his tires remain perfectly straight.

This gas station just so happens to be the local garage and agricultural equipment center ... but it's closed. An "honest engine" pay-at-the-pump system is in operation. As we come to a halt, an older gentlemen pulls in to gas up. The name of the town is painted on the side of his truck (Rising City). He introduces himself as "Steve".

Taking steps to diagnose the issue, we discover that two of Travis's subframe bolts are completely sheared. We ask Steve if he knows of anyone who can help, to which he responds "Sure. The guy who owns this shop lives just around the corner. I'll see if I have his number."

Let me take this opportunity to express that, with reference to our given location and realizing that my shirt says in big, bold letters "Find Your Hope", right about now I'm seriously considering the total abandonment of my Chicago accent (or lack thereof) for my born-and-raised Ohio twang. An improvised southern(ish) dialogue referencing our "cross-country motorcycle trip for Jesus" might help us in this scenario. For the moment, such lies and rhetoric remain unnecessary.

Steve doesn't find the number on his phone but after digging around in his truck, a business card turns up. Dialing the number, he informs us that "The owner's on his way and will be here in twenty minutes or so."

With a bit of time on our hands, I walk along the road to see if I can find the broken bolt. Knowing the thread size or tensile strength might come in handy. Suddenly, a fully lifted turbo-diesel pickup rocks the planet, scaring the clean out of my underwear as it blazes toward the station. I initially think it's just "some jackass". It's a good thing I don't react in gestures because it's the shop owner's son!

He's a good guy and tells us that his dad is one town away. Upon arrival, dad looks at the bike and mentions that he'll be needing his work truck which has all of his tools. This would take him forty minutes because he has to go to yet another town and back to fetch it.

I take a moment to pull my saddlebags and tweak/rearrange a few things on the Bandit, putting the bags' straps under the seat (instead of on top) and resting their base on my foot pegs. This lowers the center of gravity for better balance and locks them into place more securely. As I later find out, it also eats up their fabric exterior.

Travis pulls his muffler and all of the parts that block access to the subframe. We're both still in awe of the luck we're having actually finding assistance. Galactic. His compartmentalized logic and reason eliminates all other social elements with the exception of intense concern for the present situation. He's basically saying to himself "Okay, brain. Get on it before the distress sets in".

Our host eventually returns, opening his garage and getting to work. One bolt twists out easily while the other must be drilled. The insert threads are better off being cleaned as well. Surprisingly, this guy's metric ready, having a couple automotive standard #5s on hand that fit perfectly. They're still holding.

Travis is keeping the removed bit, designating it as prospective jewelry.

On a Sunday during Memorial Day weekend, thirty miles of flat in every direction, our metric "That ain't no Harley" problems are resolved. I'm not religious but wow. My eyes are on the sky for the rest of the day. All of this is a freakin' miracle. Well, that and a great mechanic saved our @$$. 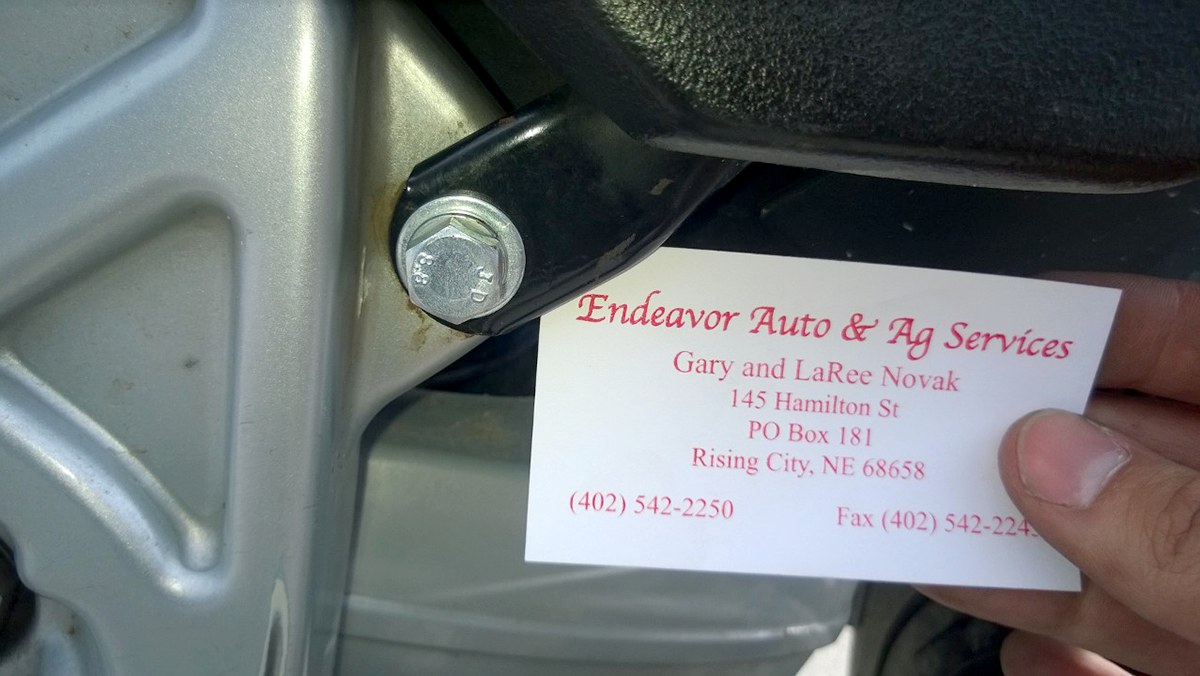 Honkin' with a wave goodbye, we head for Kearney where we book a room at the Howard Johnson's. This HoJo features dinner at, you guessed it ... Perkins. It's tuna melt time. Travis gambles on the fish platter. We're as silent as the post-credits scene from the first Avengers movie.

Cleaning our gear for tomorrow's ride is a little more than we bargain for. The bugs there are seemingly endless in their swarms. As I've said before, delicious.

Now, I leave you with this extra creepy selfy of Travis at the end of today's experience.