HomeArticlesTouringMapsUSAColoradoKearney To Denver By Motorcycle 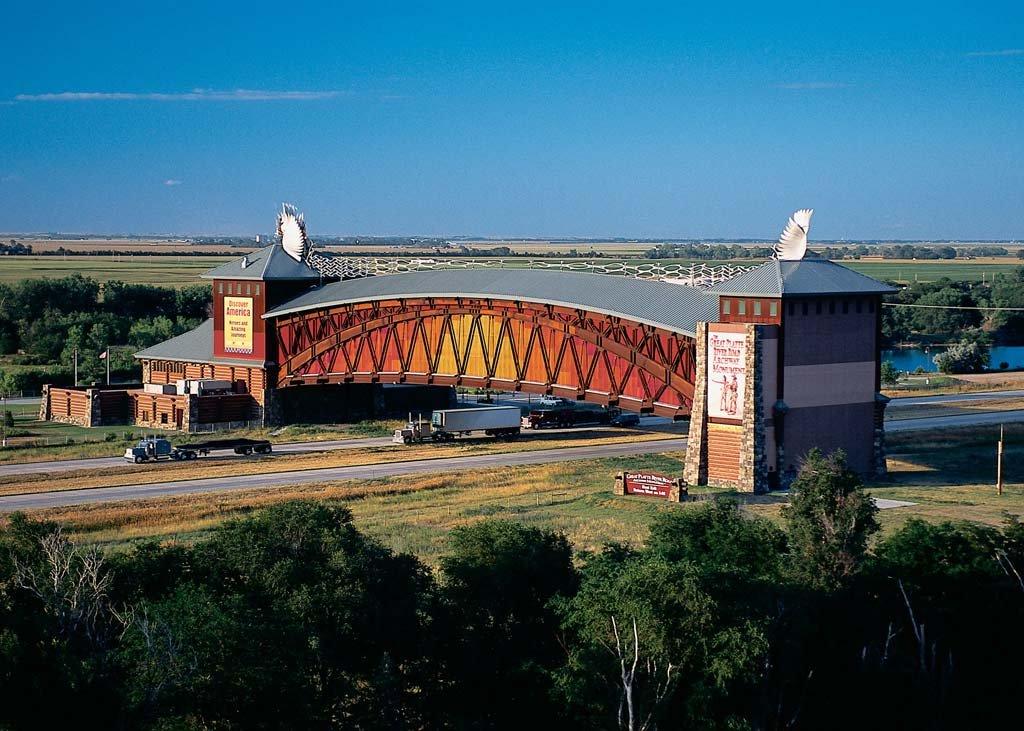 With big sleep in tow, we temporarily abandon all memory of yesterday for the promise of a solid start. Let's just say there's no duress that an evening with gin/tonic can't subdue. A HoJo with a hot tub also helps.

Breakfast eatimicated and en route to 34, Travis points out the "Kearney Archway", not that anyone could miss it. Covering three hundred feet and crossing all four lanes of I-80, the arch pays tribute to the Platte River valley's role in westward expansion. Kearney being a rural town, one of the feature attributes of the archway's promotional menu should read "the only thing here!" (no disrespect intended).

Heading west with absolutely no deviation, the weather and surrounding landscape is pleasant. Rolling hills and sunny skies make the constant straights significantly more tolerable. The endless sage brush and juniper doesn't hurt, either. Fed or not, I feel like I'm riding through a giant pizzeria. Another plus: the speed limits are higher so we're less paranoid while cruising.

Major events and concerns during this chapter in travel include:

Kearney and all of it's structural malfunctions behind us, we're psychologically ready to perform full bike inspections. At the nearest Kacey's, I look over Travis's BMW 650 single with more scrutiny than my own and vice-versa. It's reassuring to know that the guy riding with you pays close attention to detail for the sake of mutual safety.

Ready to ride, it's time for some Funk! This small town apparently boycotts Parliament Funkadelic but at least their "politics of the one" still fuel a solid backbeat. That's a music joke. [crickets]

Every small town we approach is a placeholder that divides farmland clusters. Enormous cattle ranches climb from the horizon every fifteen miles or so. One industrial village in particular confuses our senses when Travis eventually says what we're both thinking:

“This town smells like cow $h!t and grape jelly. I don't know how that works but …”

Just outside of McCook, we consider leaving route 34 for route 6 which heads north before running both parallel and tandum to I-76. Travis eyes his weather radar and mentions a storm cell that's heading (supposedly) away from us but eliminates any route substitution. The brunt if it is moving E/NE whereas our trip takes us W/SW, so on 34 we remain.

Still, we have a problem in that "X" marks the spot. Our options are to wait it out (allow the storm to cross over our path) or outrun it. What we don't know is that the radar is withholding information.

As we're about to cross the Colorado border and with nobody around for miles, I glance down at my phone to make sure that the screen is off. Travis, having just noticed Colorado's welcome sign, activates his intercom to shout "Photo opp! Photo opp!" before mashing his brakes into a near skid. He grinds eighty to zero in about five seconds.

This is why we're taught to position ourselves in a staggered/disjunct formation while riding with a group. Just starting to look up, I blaze by him at full speed with a near miss, the scent of Beamer exhaust permeating my helmet. What just happened?

Travis is one of the safest riders I know, so I'm not going to argue. One positive: coffee is no longer of concern. We take a few pics and are on our way.

Nearing the storm's intersection, my stomach starts to grumble. Travis pulls into Yuma's local Dairy Queen where I order some Nebraskan cheese curds (?) and a sandwich. Both of us plow through lunch faster than usual and I get the sense that my co-traveler is becoming disturbed.

Confused by his response and ignorant to the situation, I turn my attention to the nearest window. A sea of dark blue, deep purple and total blackness tornadoes violently on one side of the road while it's all sunshine and lollipops on the other. Surreal.

The street is completely untouched but on it's horizon there's a pattern forming: rain curtain, sun, rain curtain, sun. This is likely to become a game of rain Frogger, otherwise deemed storm "racing" as opposed to "chasing". We decide to risk it and leave.

I'm not the most religious man in the world but after yesterday's events, this next bit comes as no surprise. As we're riding, I express to Travis over the intercom my belief that "we've totally got this". Upon punctuation … Hail.

My phone's waterproof cover isn't on (tha' hell was I thinking?). We accelerate past a semi-truck full of livestock. It produces a massively disjunct head wind. A chaotic barrage bludgeons us, throwing us lane-to-lane and obliterating all communication for a total of about 60 seconds when, as if at the touch of a button, it all disappears. In an instant, the rain, hail and wind ceases. It's absolutely beautiful out and the remainder of our ride is hazard free.

As we arrive in Denver, we're greeted by our hosts, a bandmate from Travis's punk-rock past and his lovely wife. They help us get situated before suggesting a few locations for dinner. First, we park the bikes and grab our walkin' shoes. 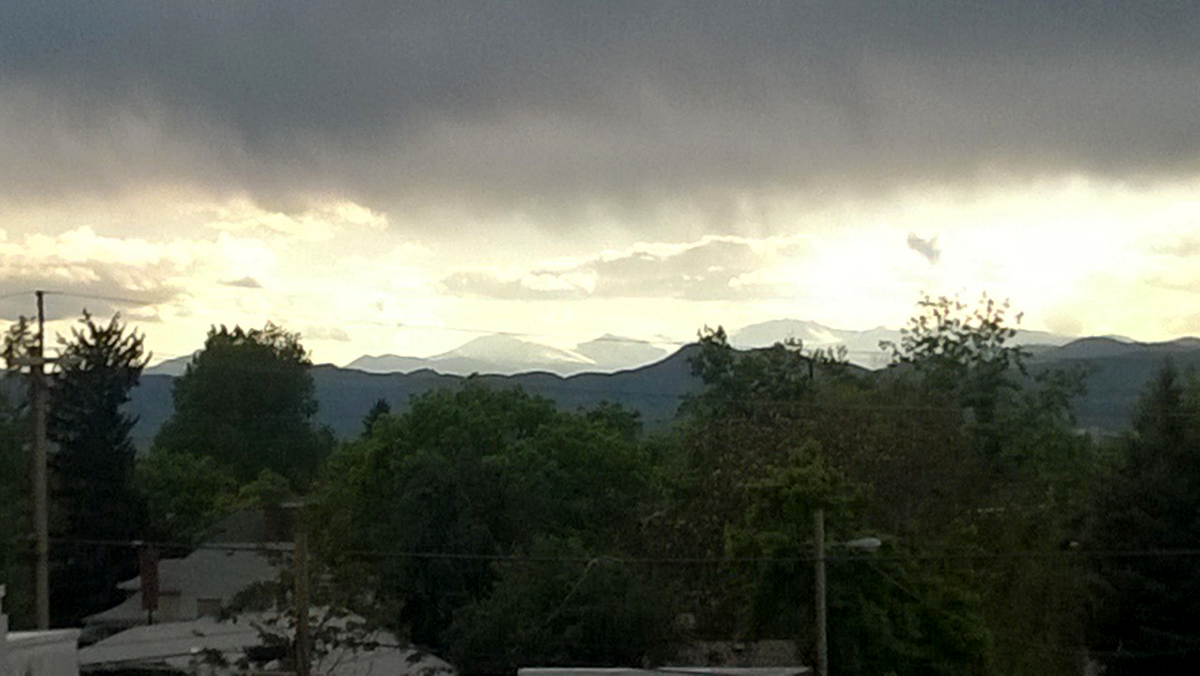 After some discussion, we settle on Gary Lee's Motor Club & Grub where the outdoor seating, complete with bonfire, amounts to some pretty tasty tacos. A mental resonation of days prior is beginning to surface so we bypass beer, making a bee line for whiskey. Failing to consider the equation of alcohol versus altitude, the evening finds it's conclusion in a photo that I don't remember being taken. 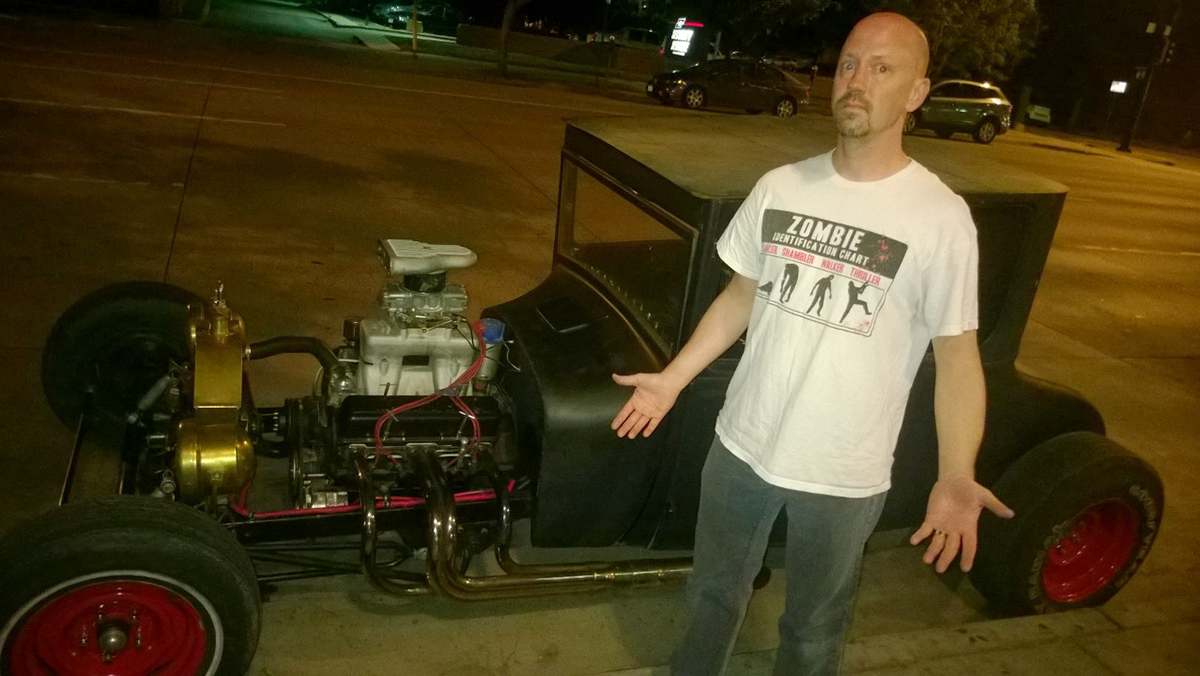