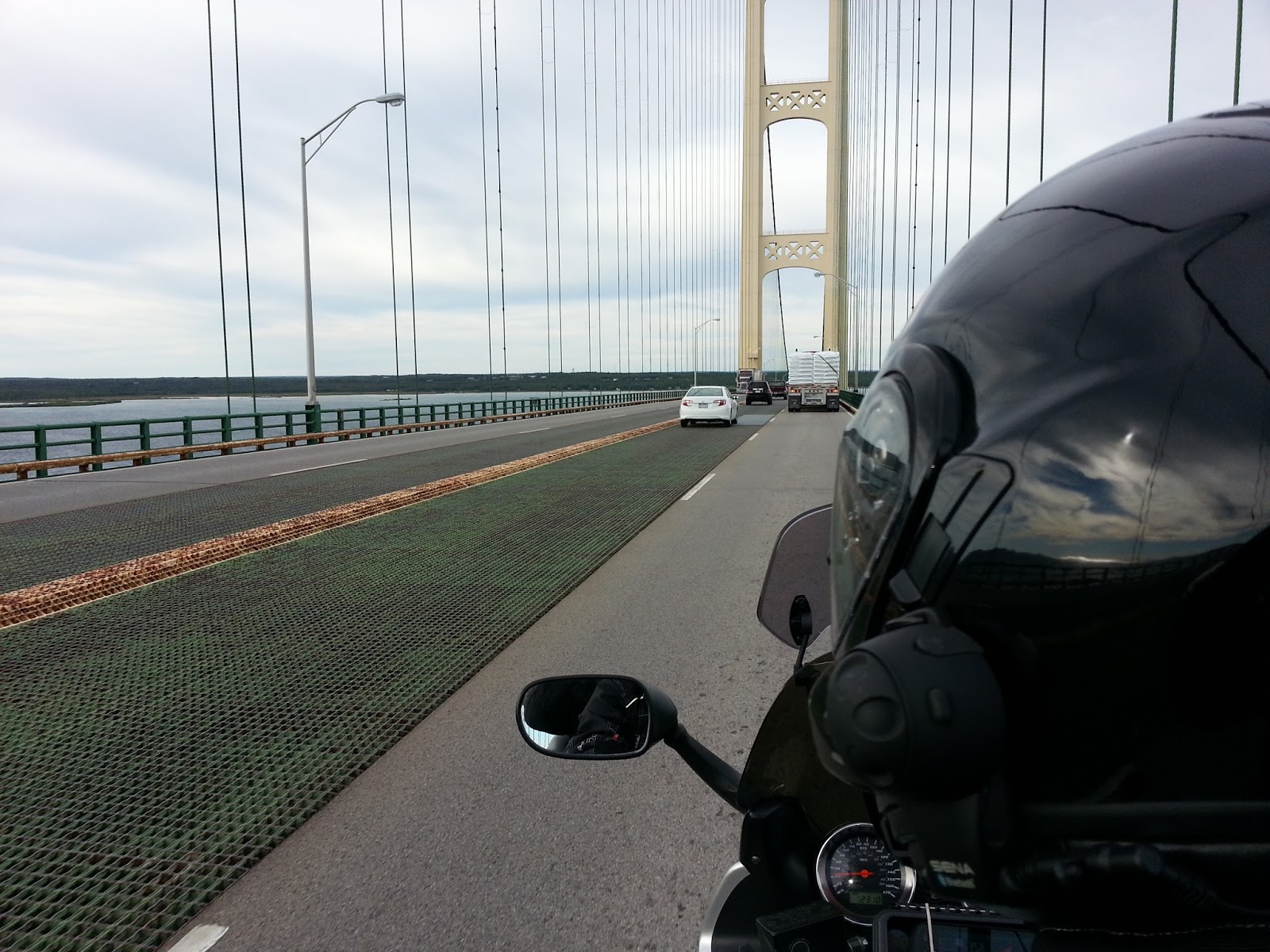 Note: This article documents the "official" Lake Michigan Circle Tour. The LMCT is great but it's a bit tame by sport touring standards. For wider, more continuous grins, we recommend exploring this updated and twisty-centric revamp of the entire route.

My wife and I love to explore unfamiliar territory. Having both read and heard about the different Great Lakes tours, we agreed to consider the Lake Michigan Circle Tour as an anniversary getaway. Knowing that we enjoy a variety mixture of fast-paced backroads and scenic ambience meant we'd be gathering as much information as possible beforehand.

“If you're new to long distance motorcycle travel, the Lake Michigan Circle Tour is a perfect first-time experience. The ride is secluded without isolation.”

There are plenty of stories and map suggestions out there. Certainly, some are directed toward expressway types (slab riders). Others connect Iron Butt candidates to their end goal. Our friend Eric Shropshire completed his trip two-up ... in two days! That's not for us. Every journey has it's inspiration. Ours would be a stress-free mentality.

Then we found the Lake Michigan Circle Tour route below. To make it our own, we opted to ride backwards. A cop pulled us over and said that was too dangerous, so we just went the opposite direction (ba-dum-bump).

First of all, it would seem that whoever initially built this route prefers a boring path through Wisconsin. We like 32 all the way to Sheridan. Consequently, that keeps the scenery peaceful and got us home smiling. 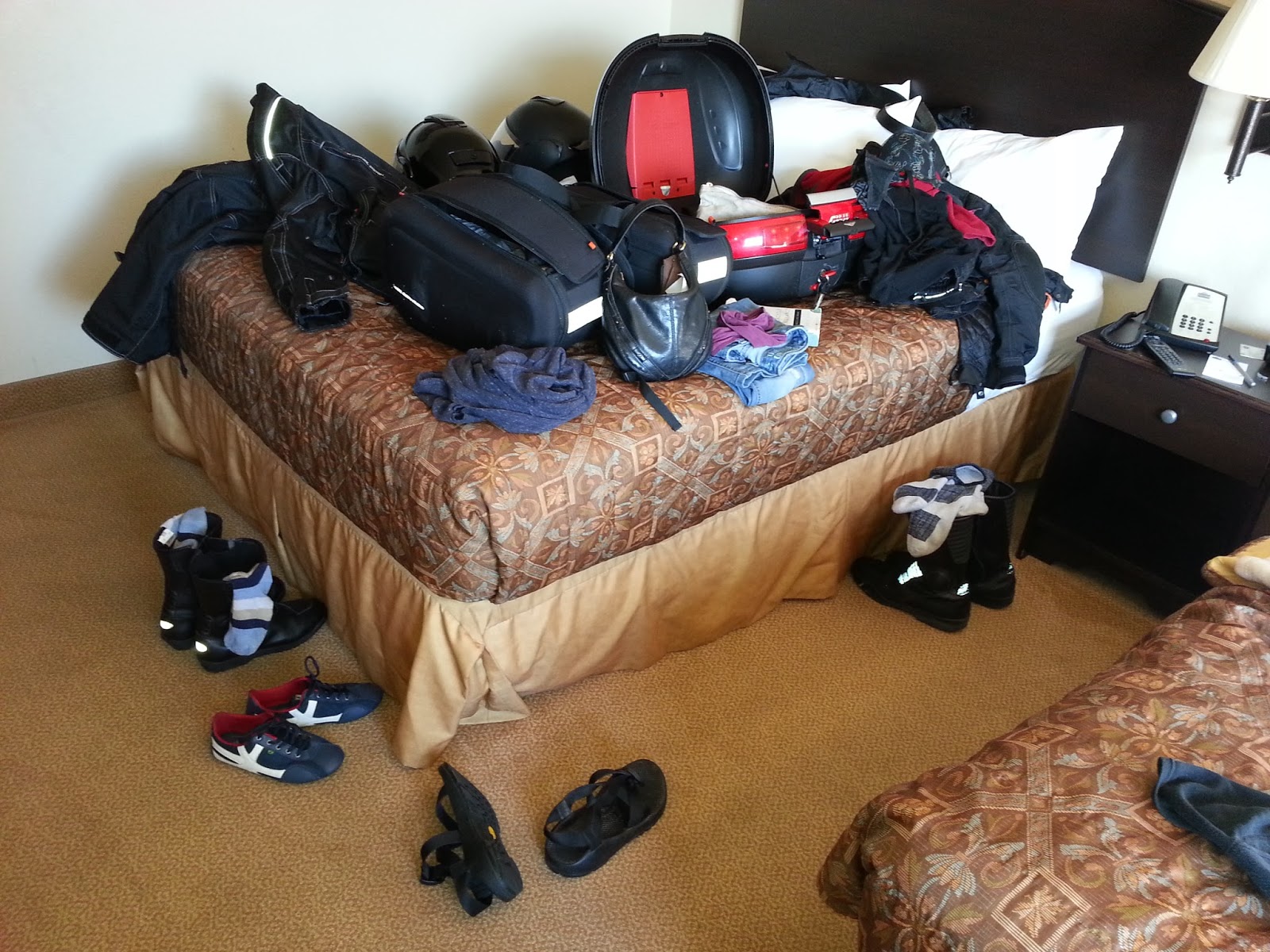 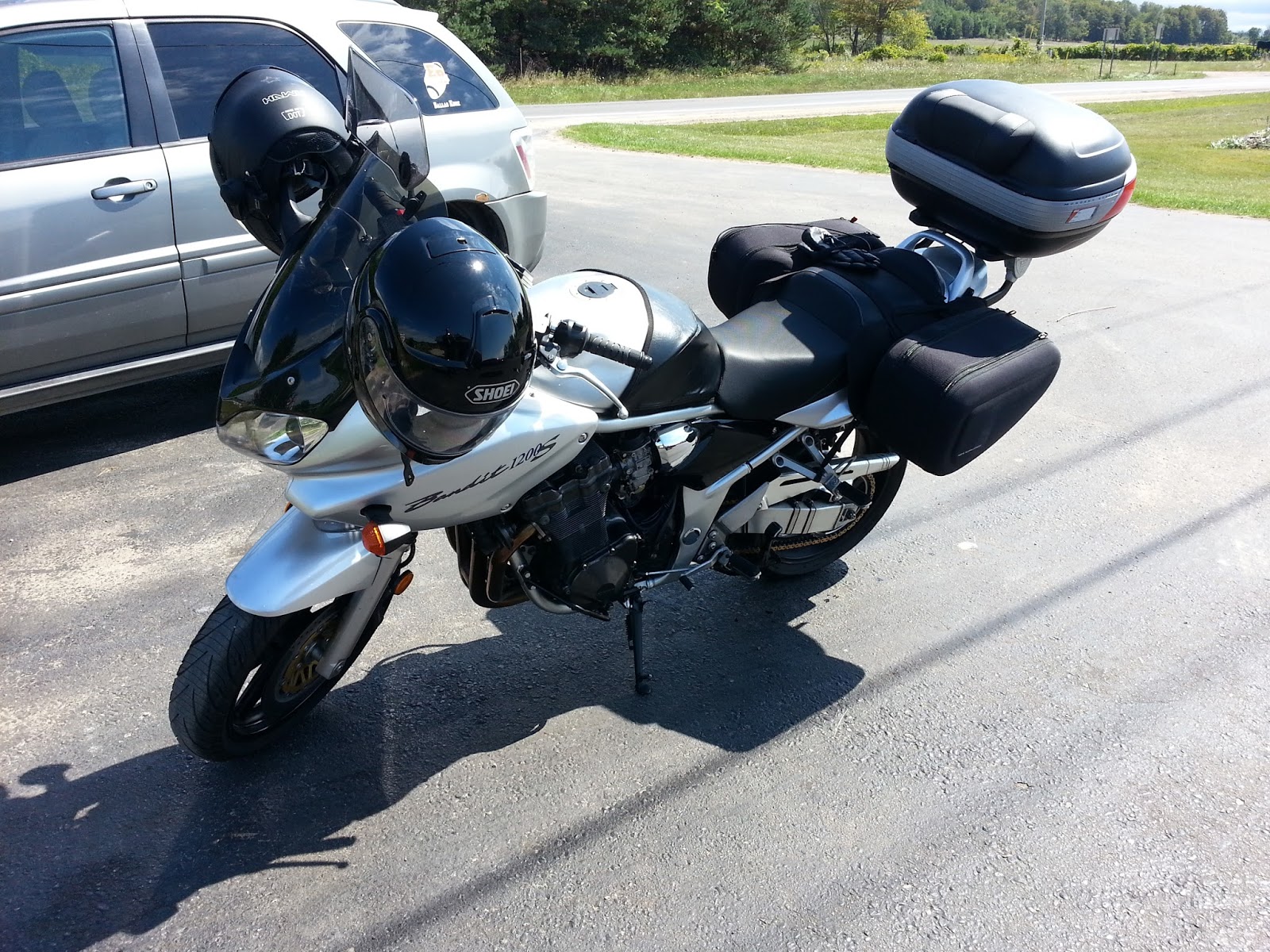 Taken mid-trip, these two are out of sync but make a perfect starting point. ALL OF THIS fits on the bike and, surprisingly, without much hassle. Note: the Comfort Inn near Manistique is great! 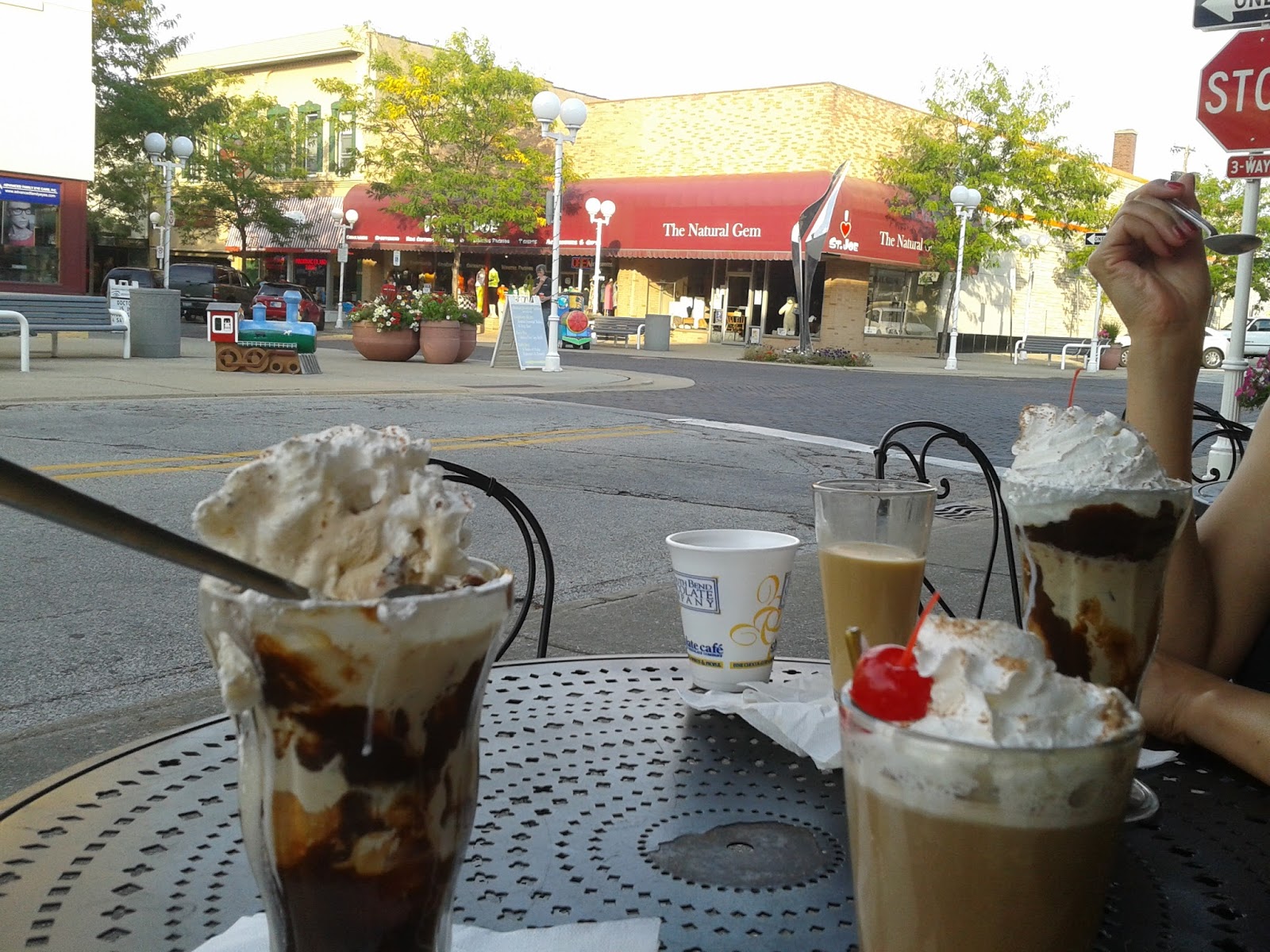 This photo is a bit bastardized (but we're gettin' better). Our first stop for Z's was South Haven, Michigan. This is NOT a photo of South Haven. Actually, it's an after-the-fact pic. The ice cream, however, is from Sherman's. Sherman's Dairy Factory, based in South Haven, has an ice cream parlor attached! We called it dinner that night. Our mothers couldn't stop us. Speaking of which, our stop between Chicago and South Haven was Warren Dunes, a favorite of mom's :-) 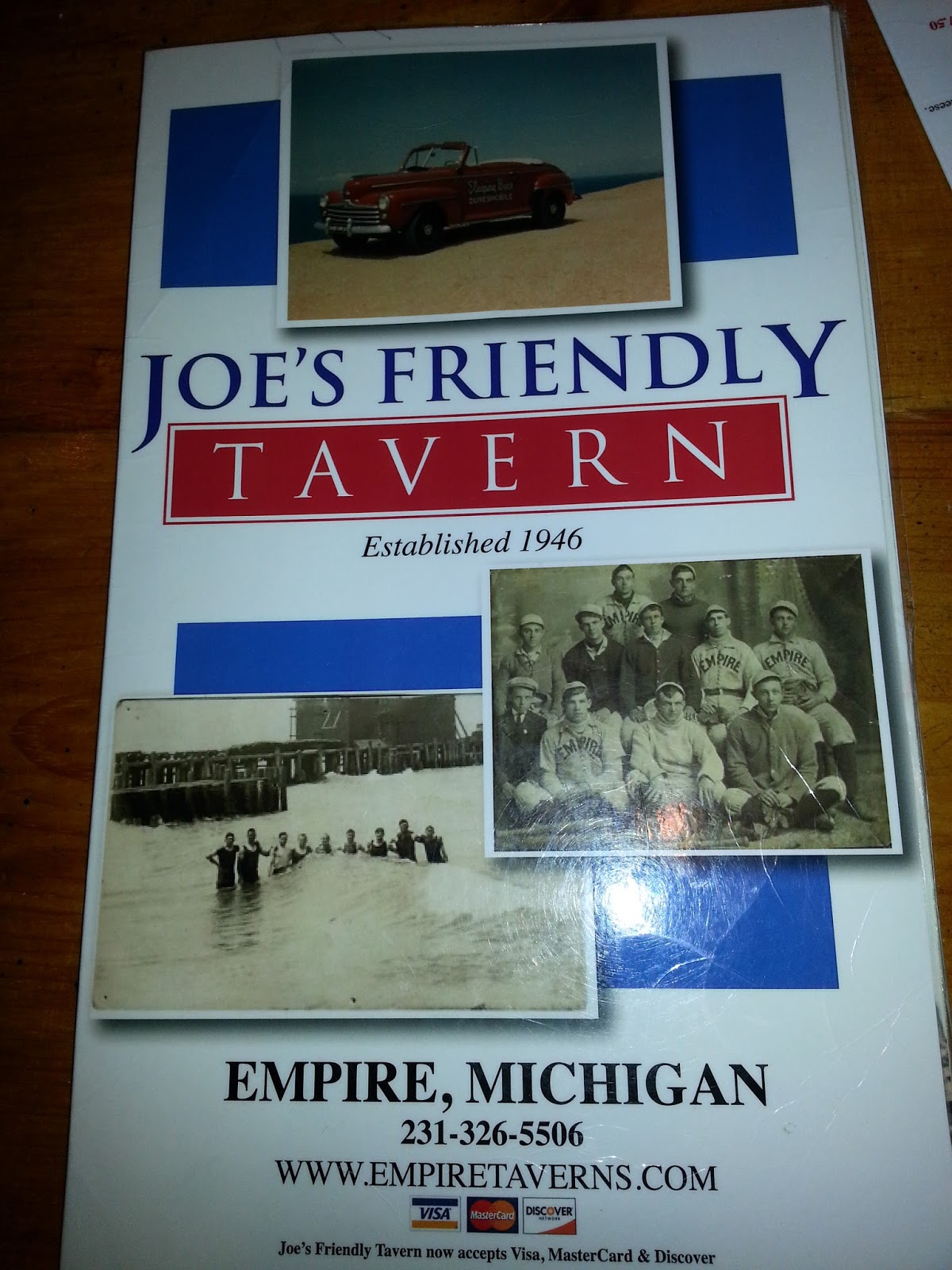 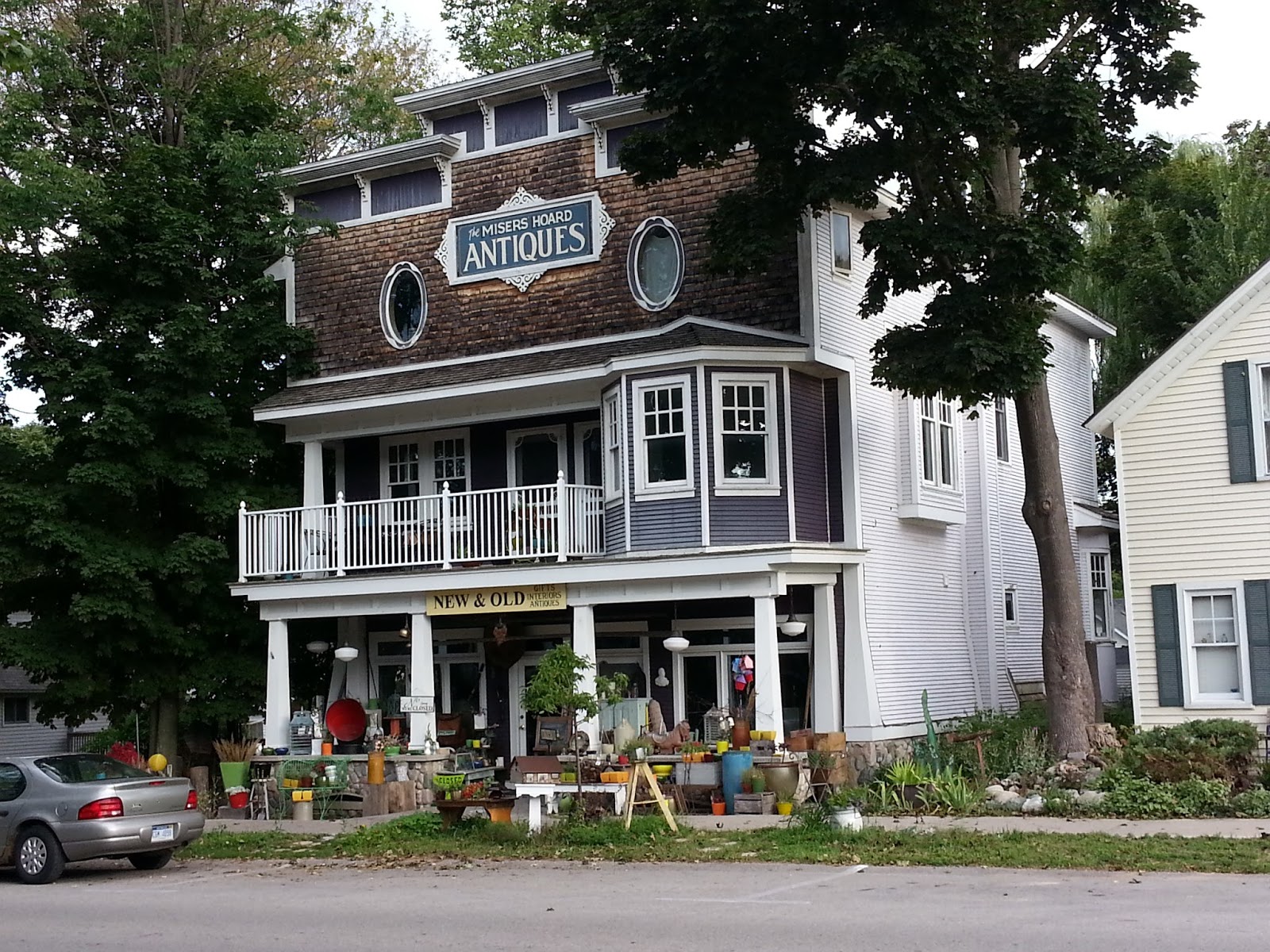 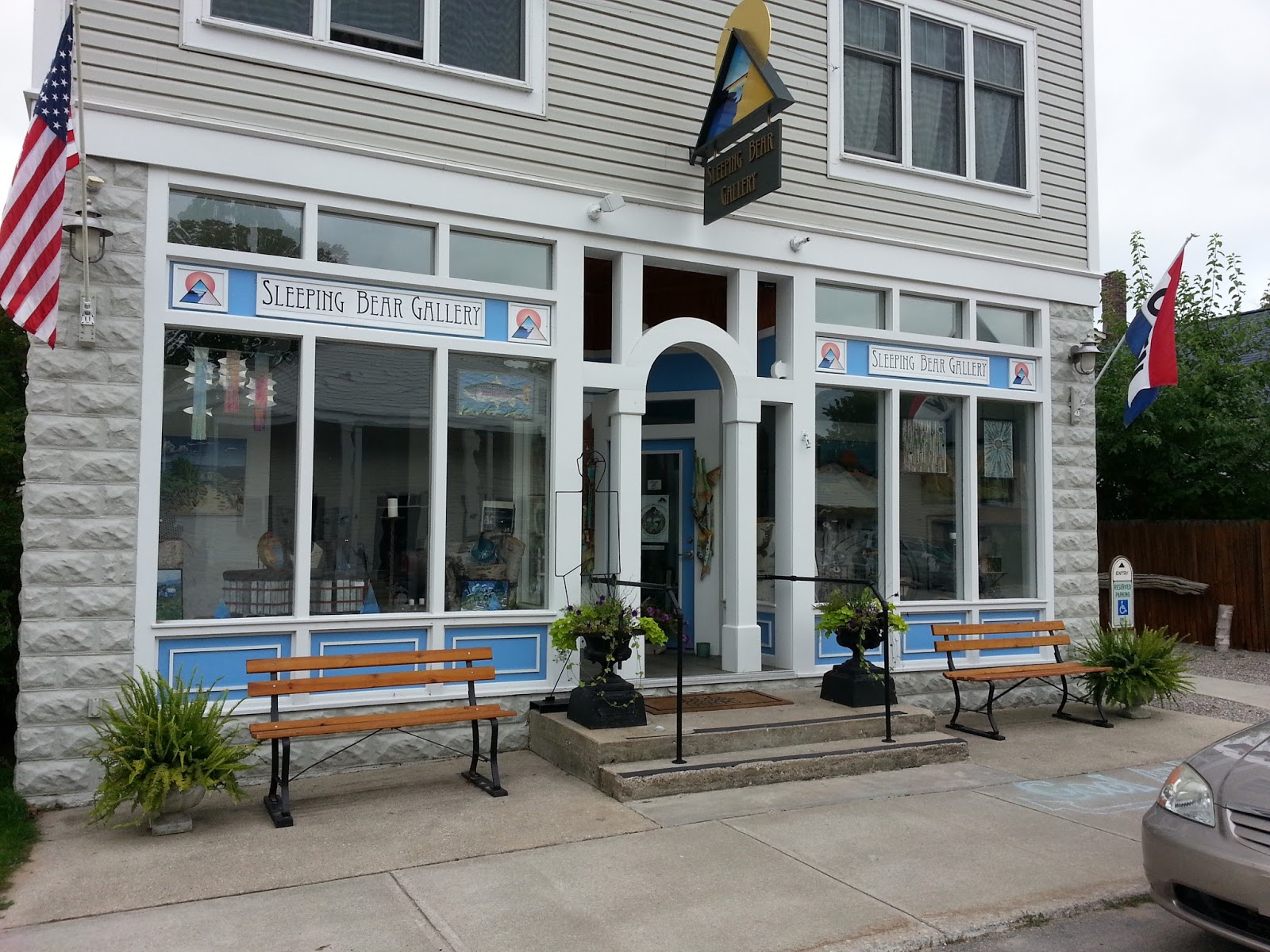 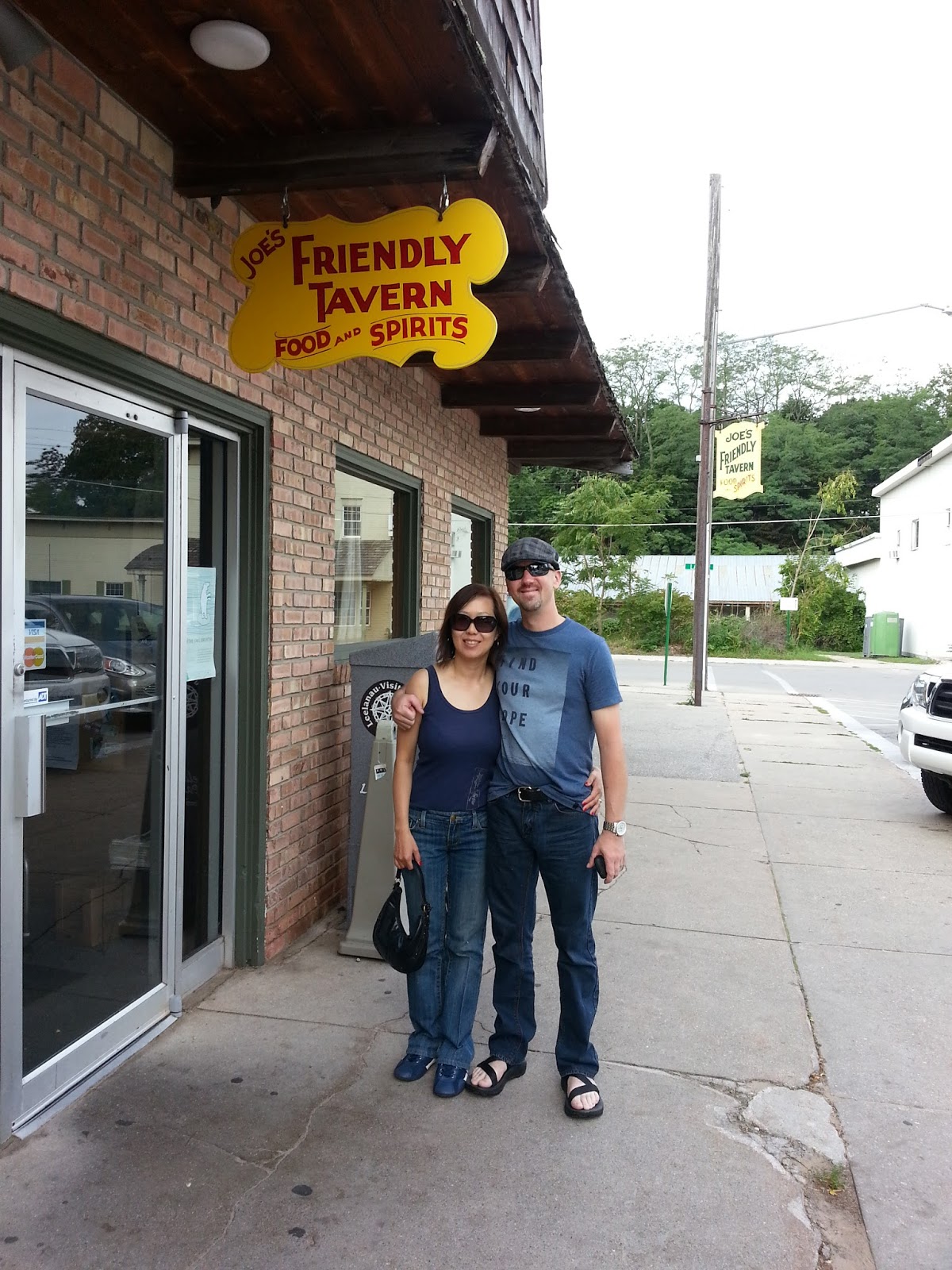 The above four photos are from Empire, Michigan. A lot happened between South Haven and Empire but we were so glad to be riding, hugging corners, seeing the sites, smiling constantly, that we waited until our next motel to take pics! By the way, Joe's Friendly Tavern serves duck quesadillas at dinner. Second, they offer blueberry sourdough french toast for breakfast (no joke). We stayed at the Empire Lakeshore Inn which is under new ownership ... a young yooper couple that are more polite than anyone. "Oh! Suuure! Doncha know? You betcha!" 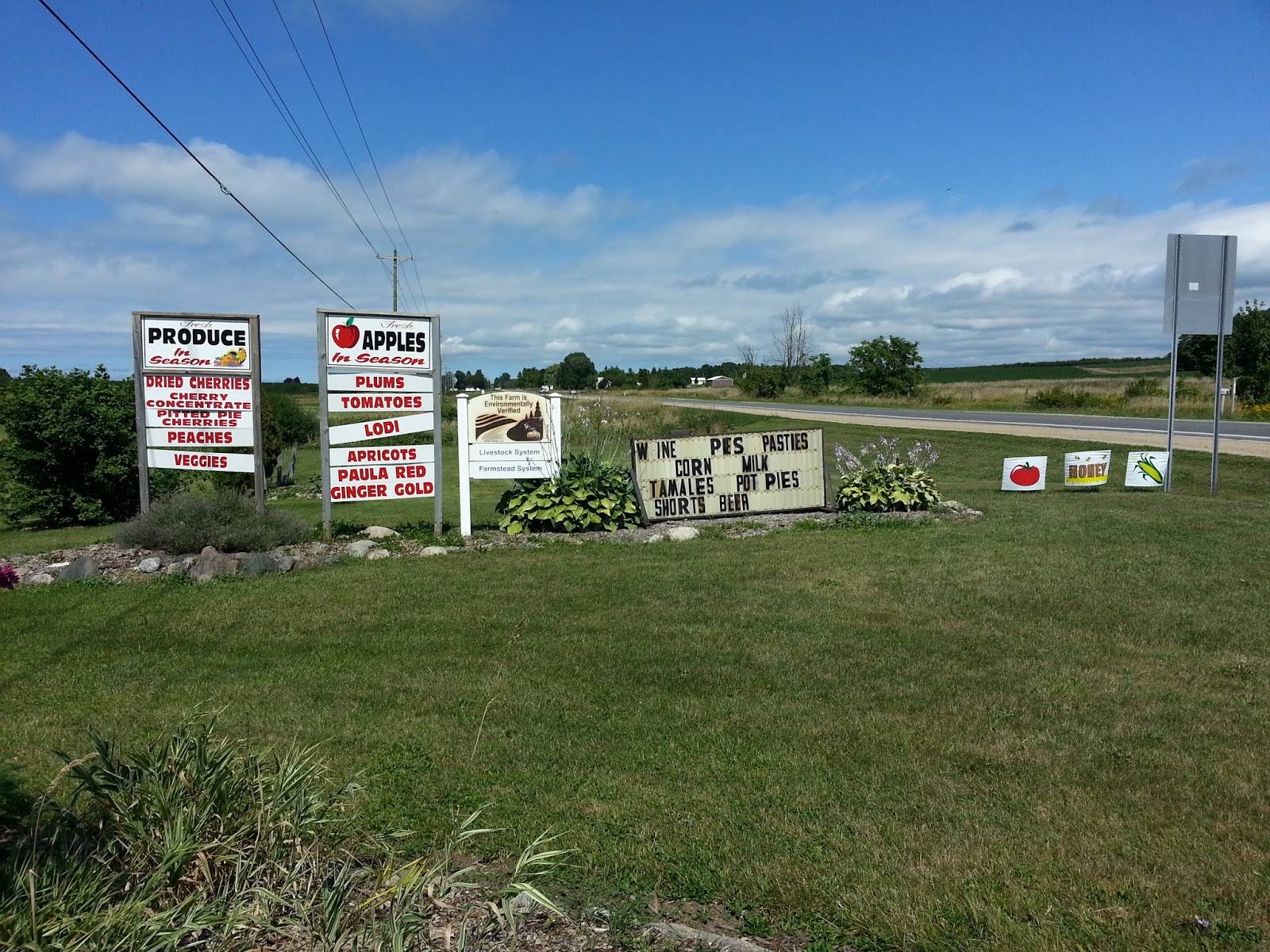 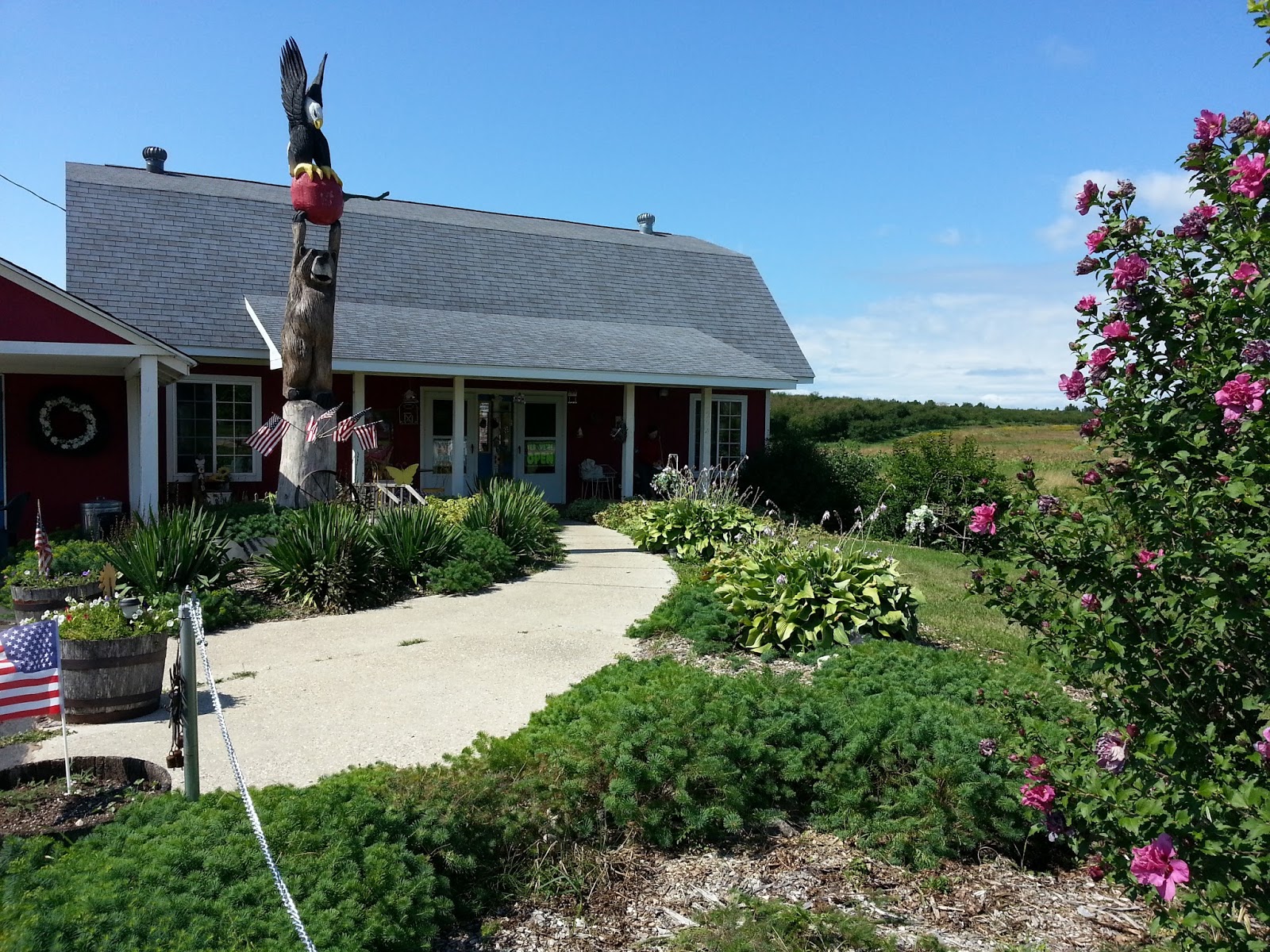 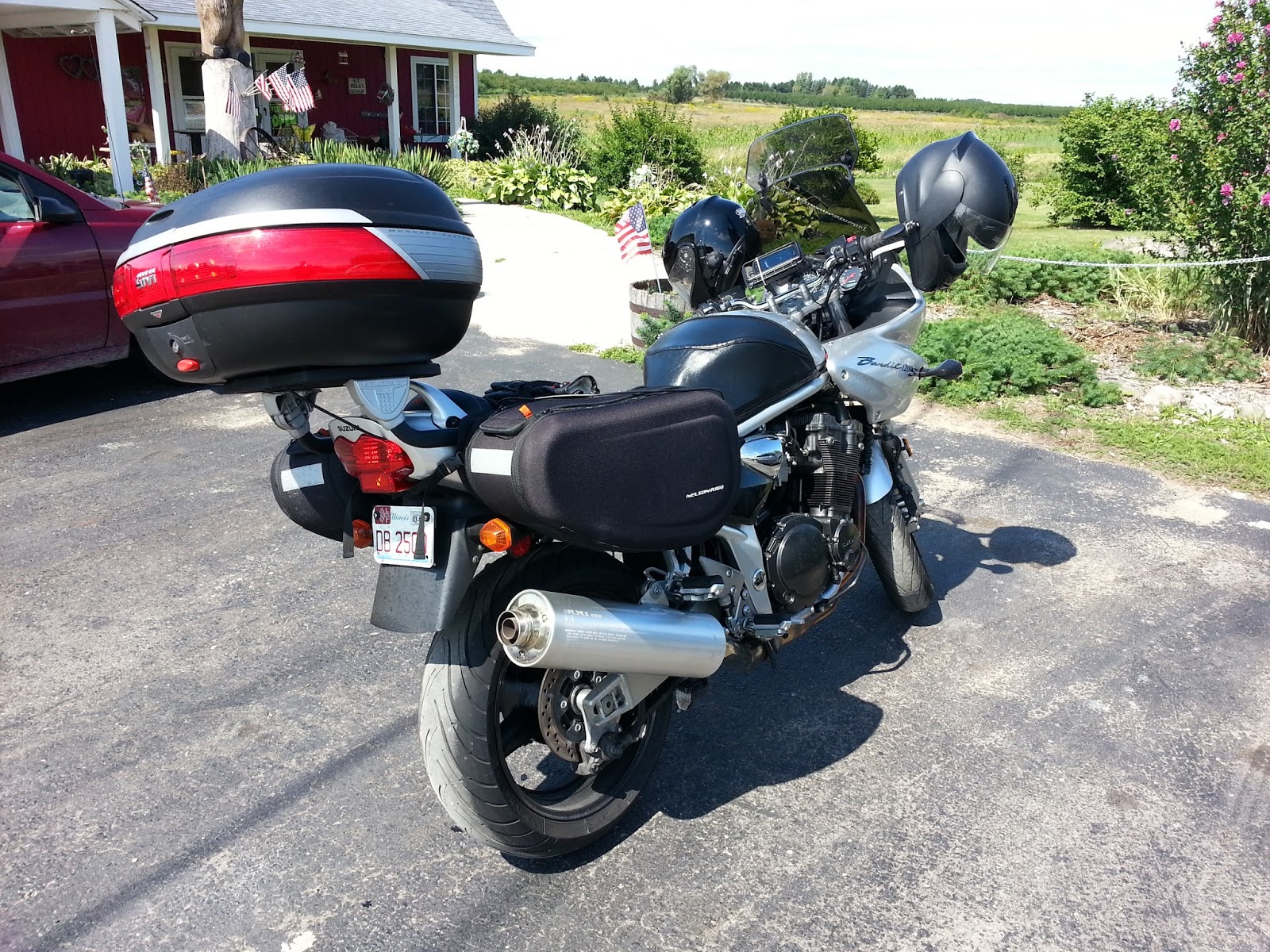 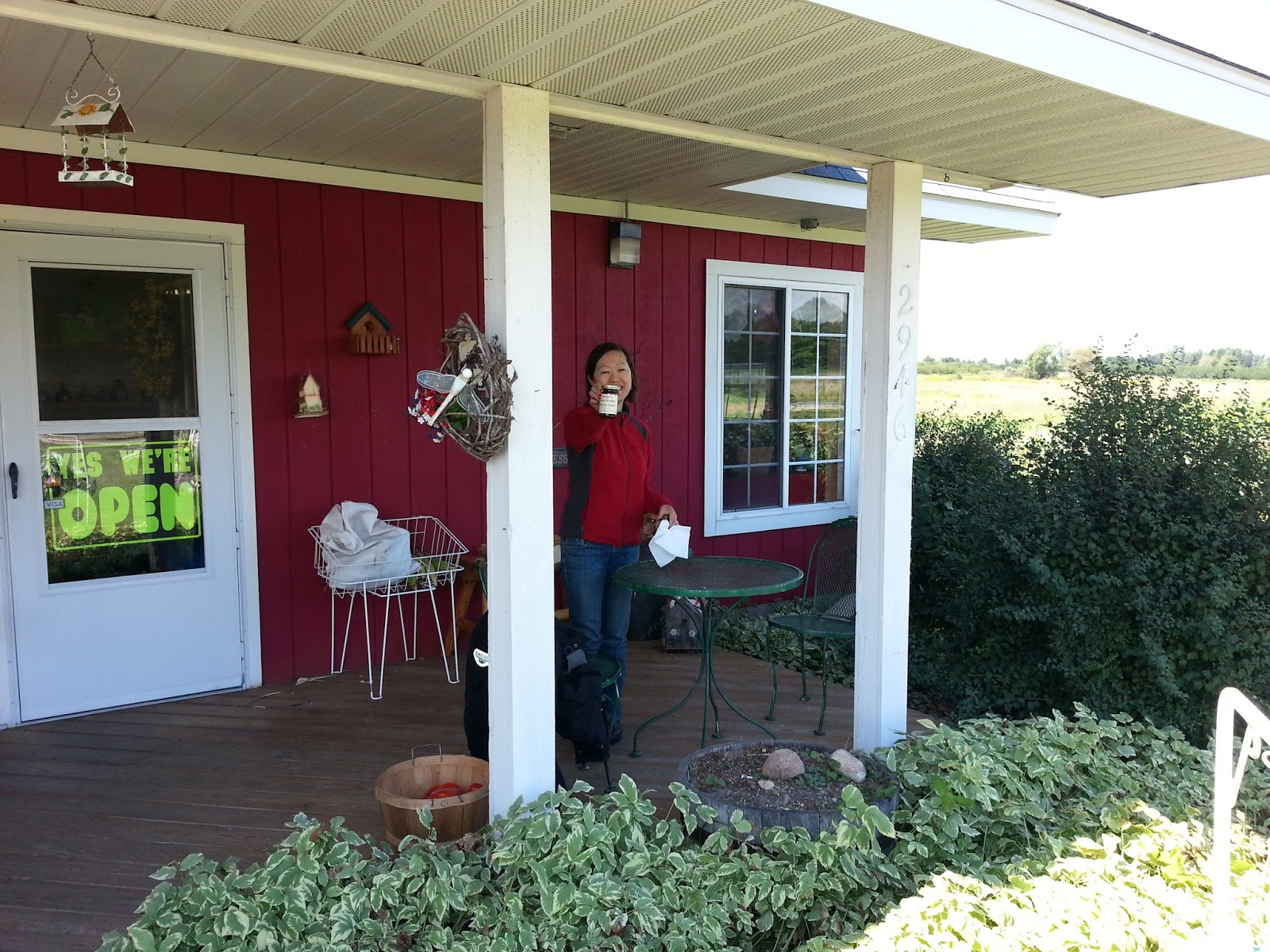 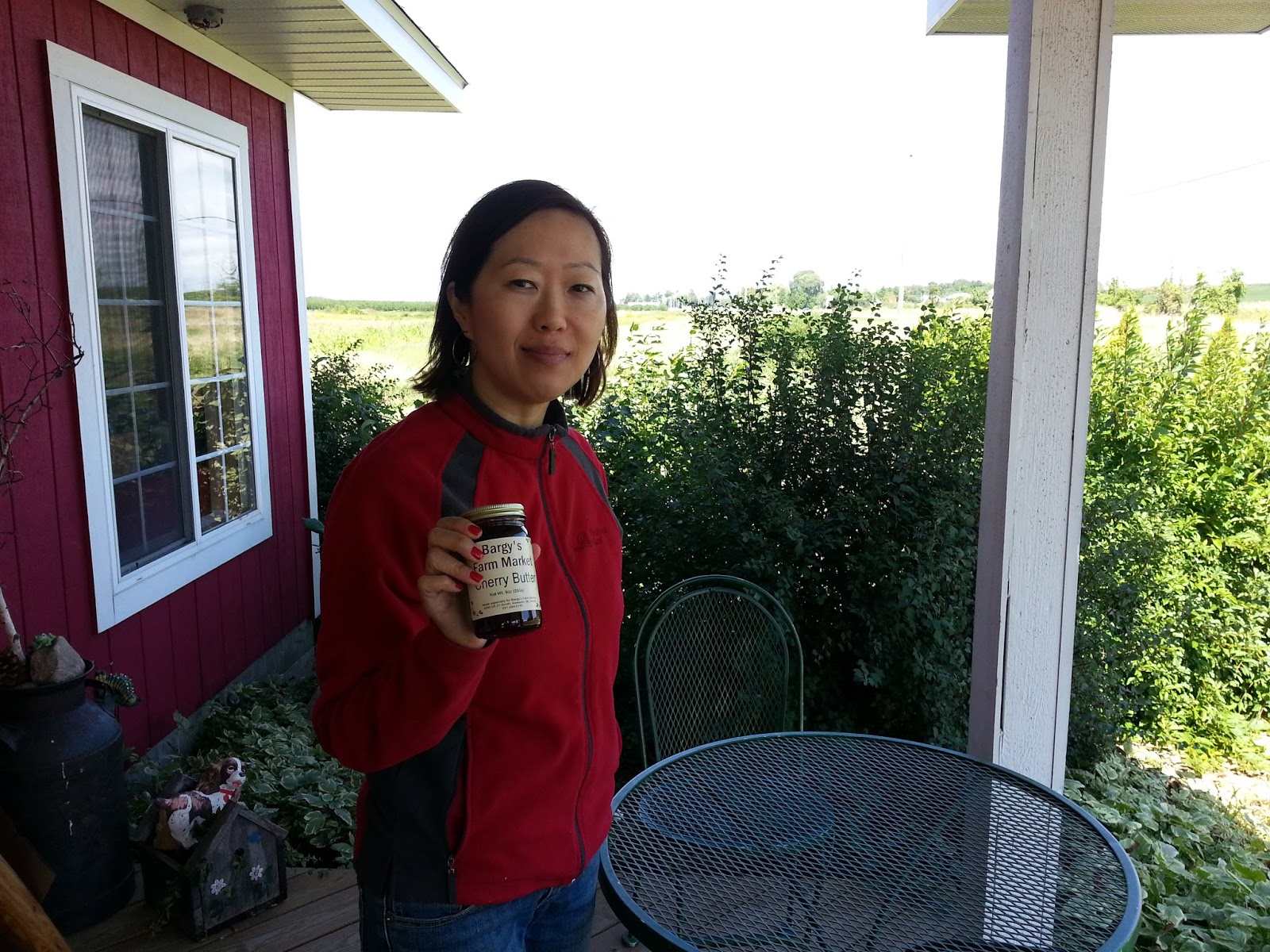 Like bullets, my wife yells into the helmet intercom "Stop! I want pie!" and so we did. We each scarfed down two turnovers. One was cherry, the other peach. Perfection. The ladies inside blend fresh cherry butter. You're damn right we bought some. Bargy's Farm Market in Kewadin, Michigan. This is one of those things that sets Michigan apart from Wisconsin. Michigan has roadside fruit, pie and vegetable stores that are really happy to see you. Wisconsin has corn and cattle. The cattle doesn't fit on the bike. 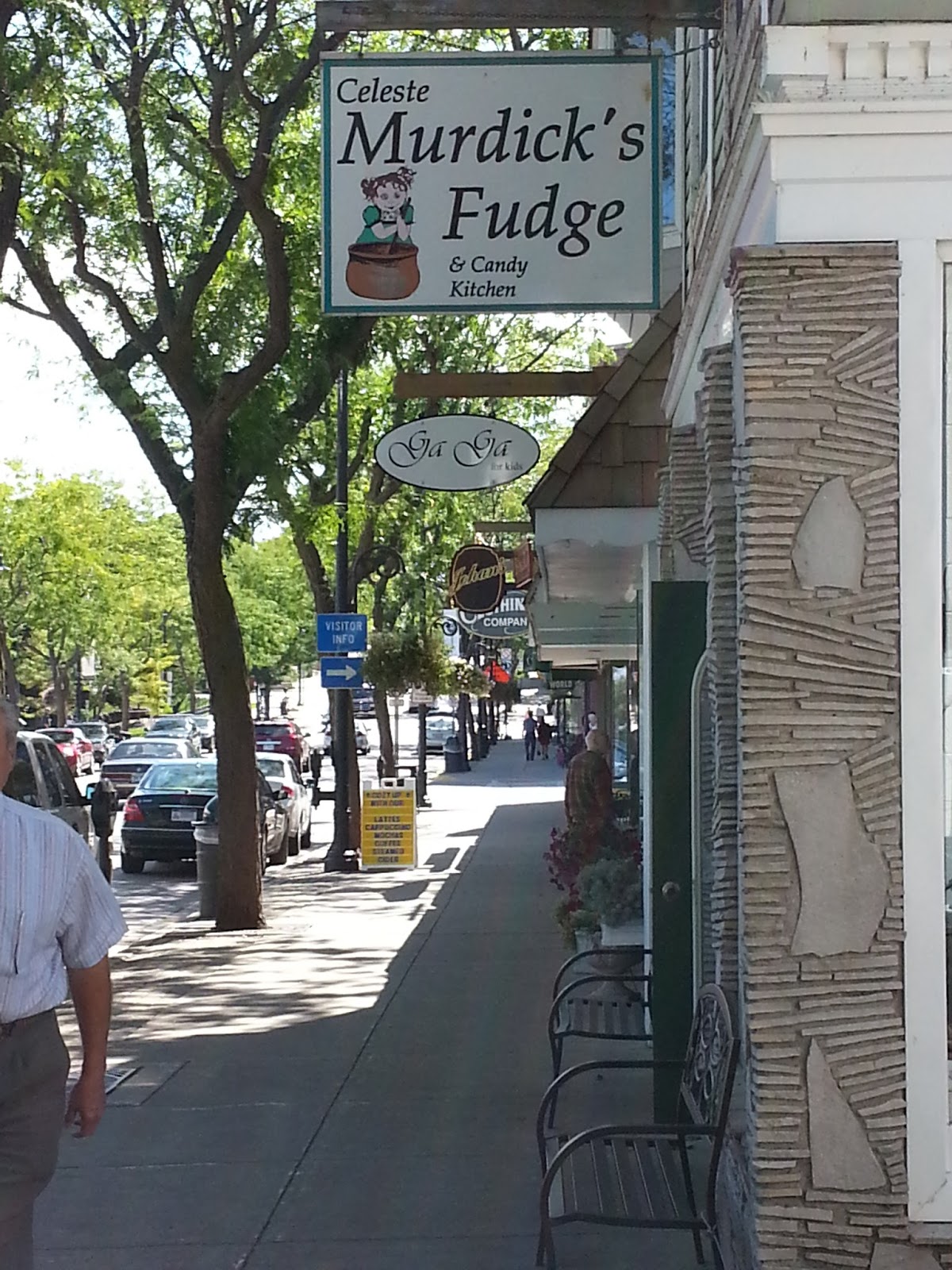 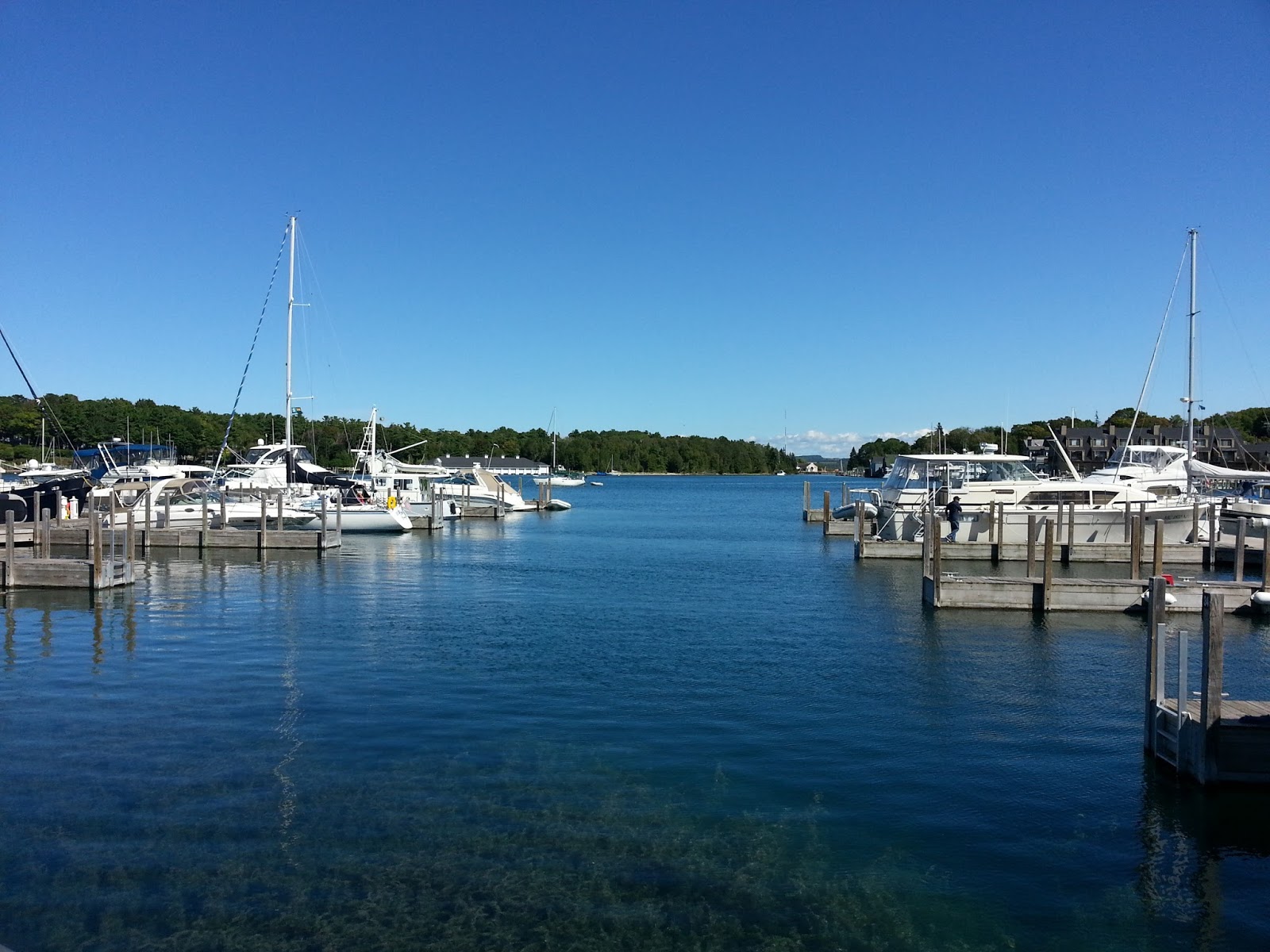 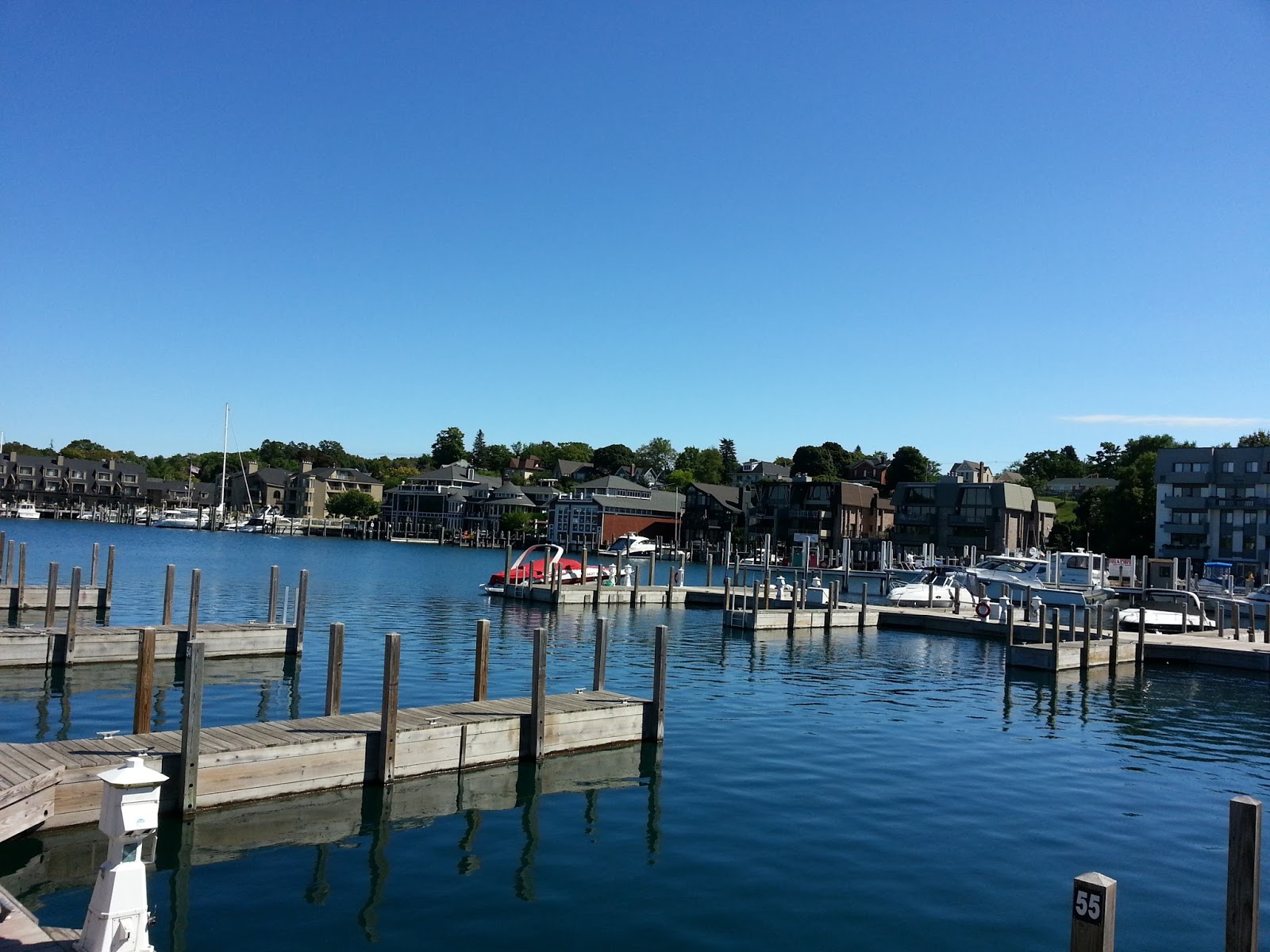 All three photos above are from Charlevoix, Michigan. It's an elegant town, to say the least. 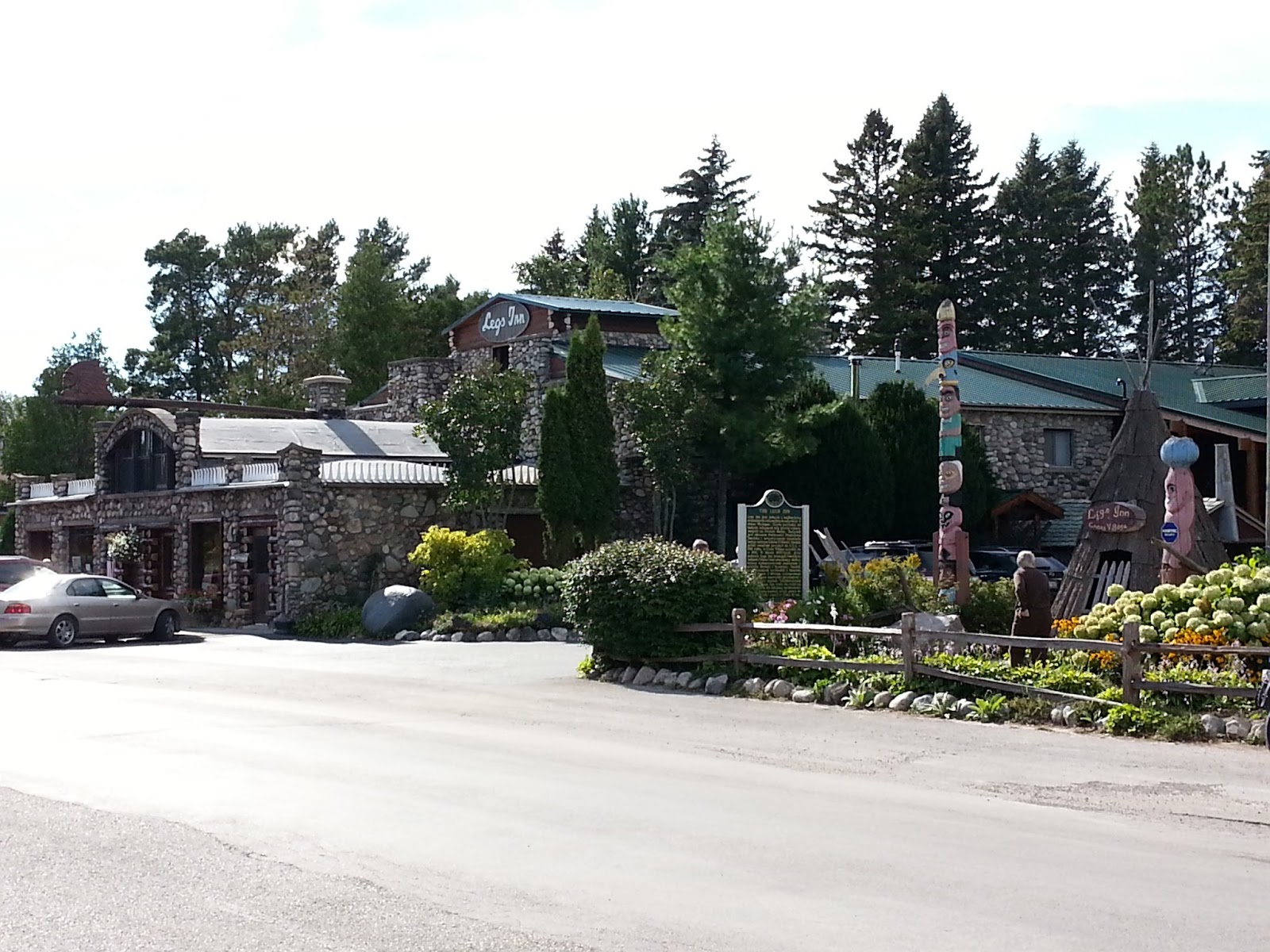 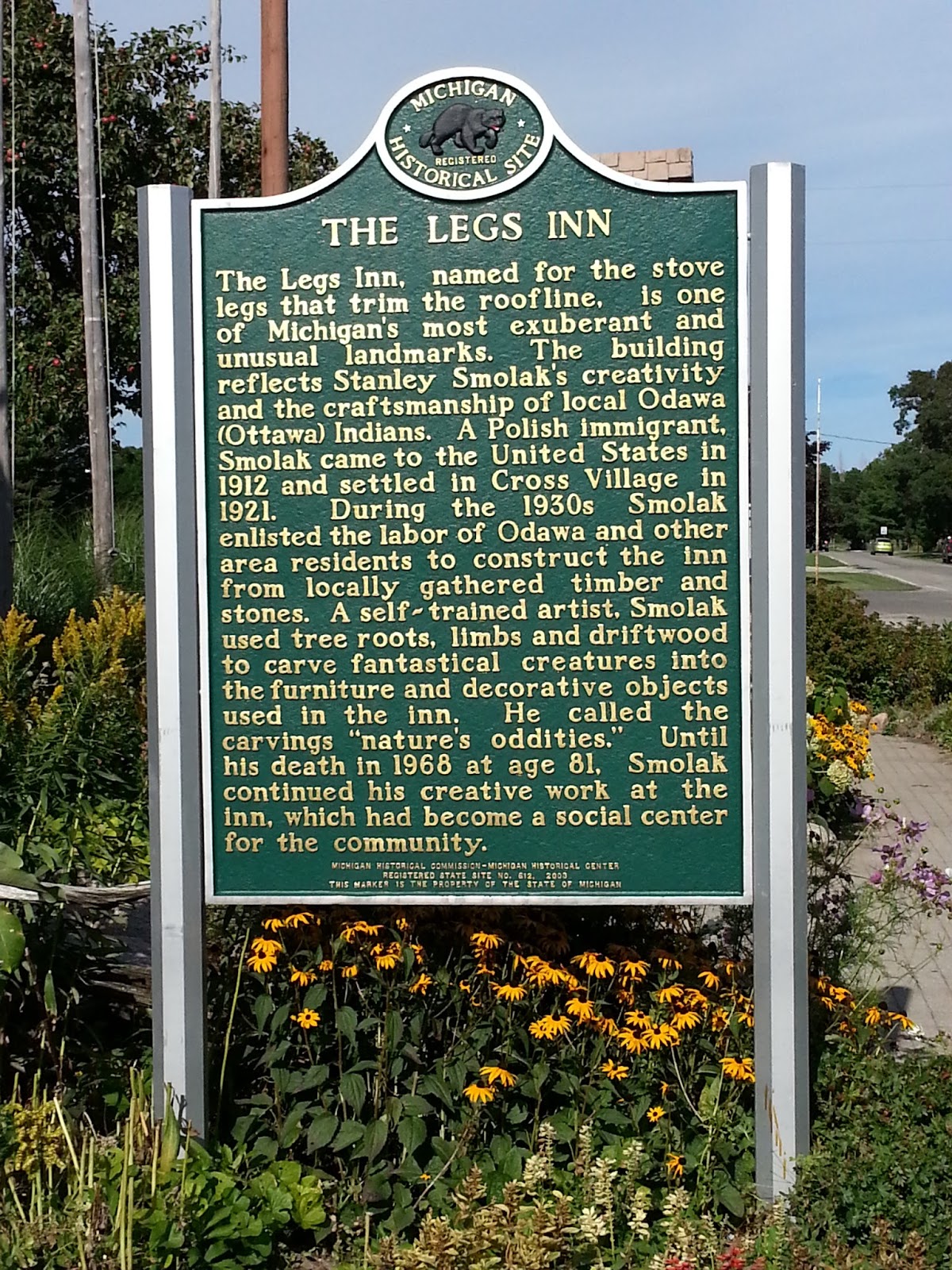 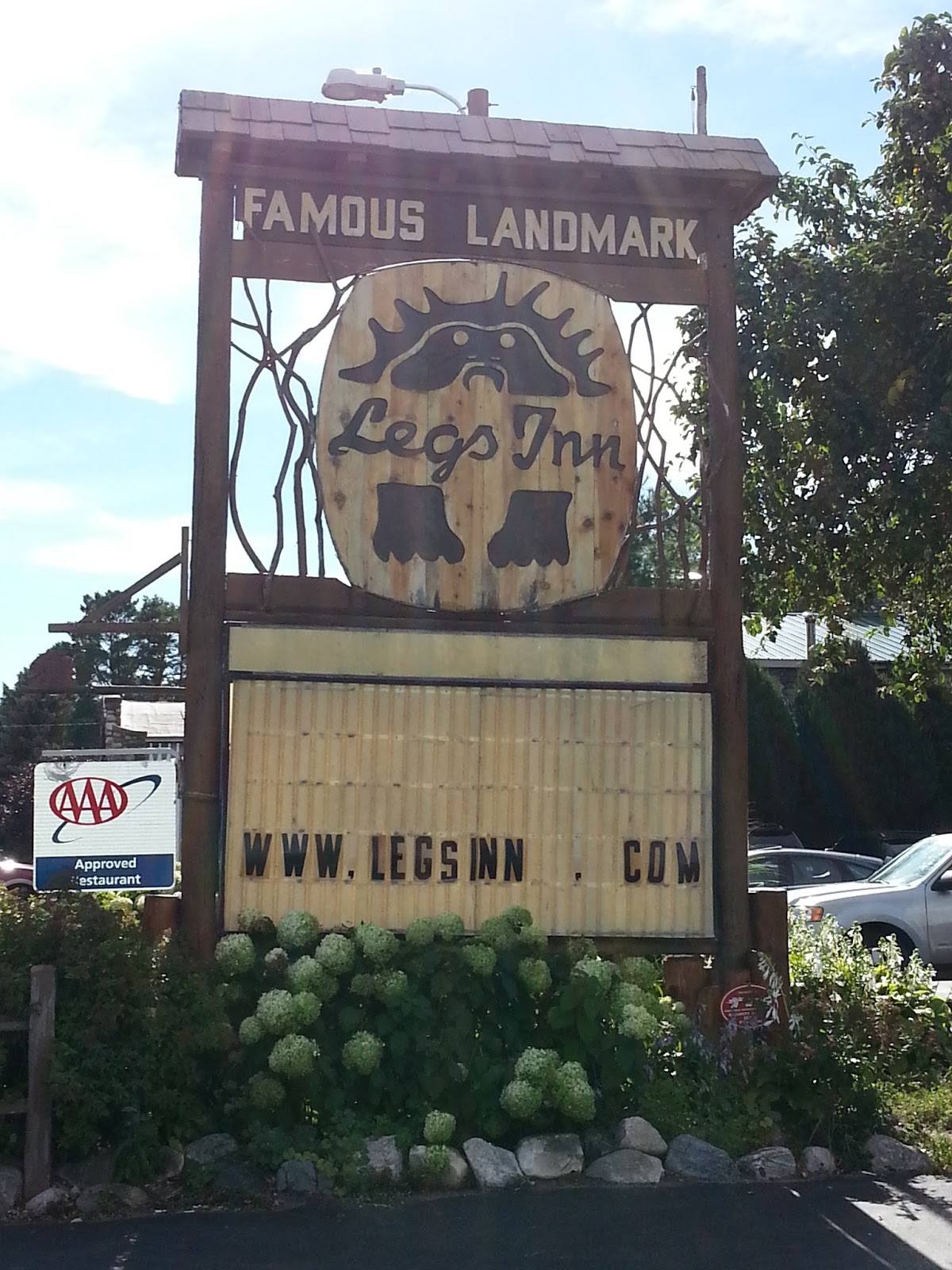 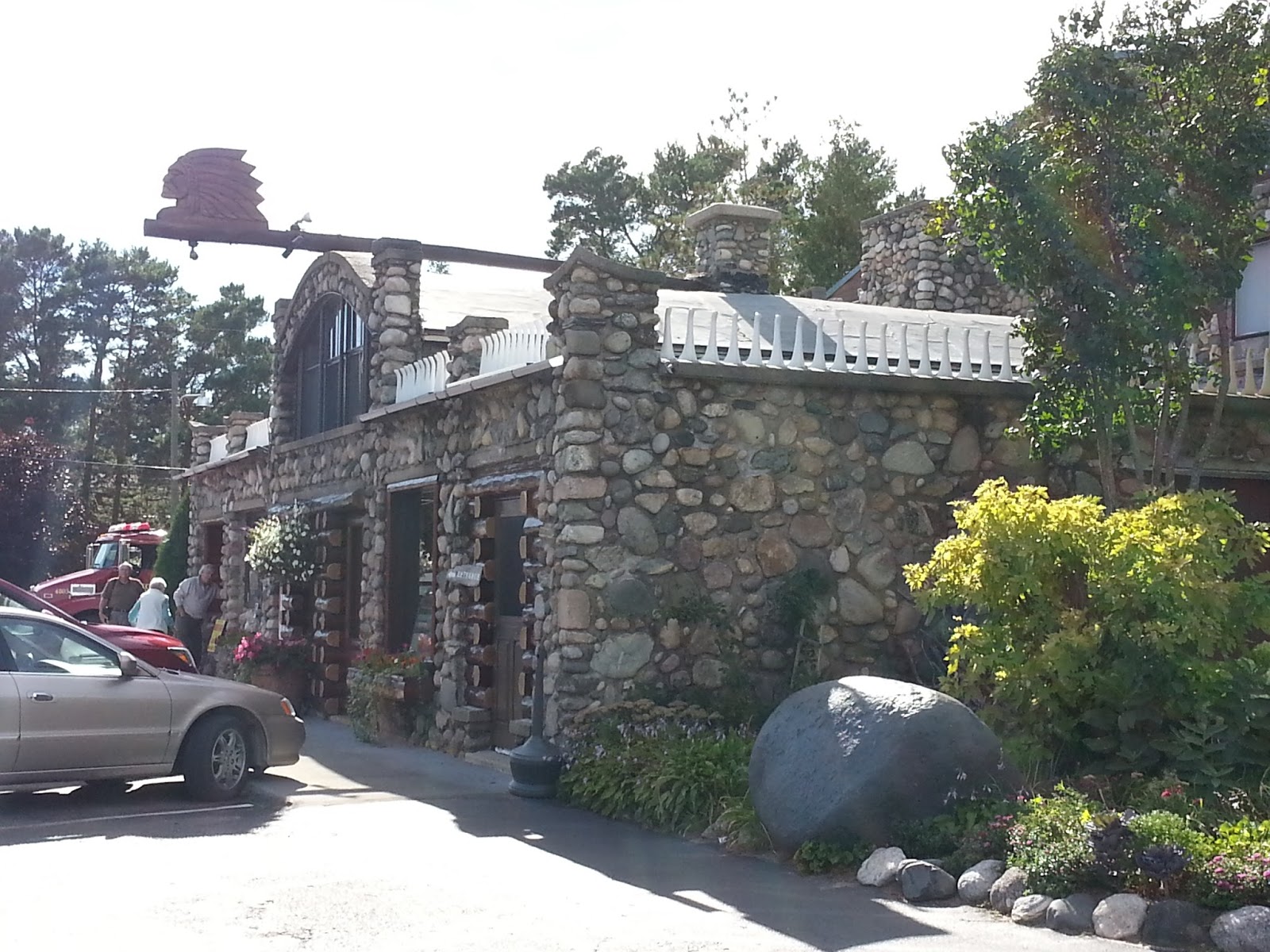 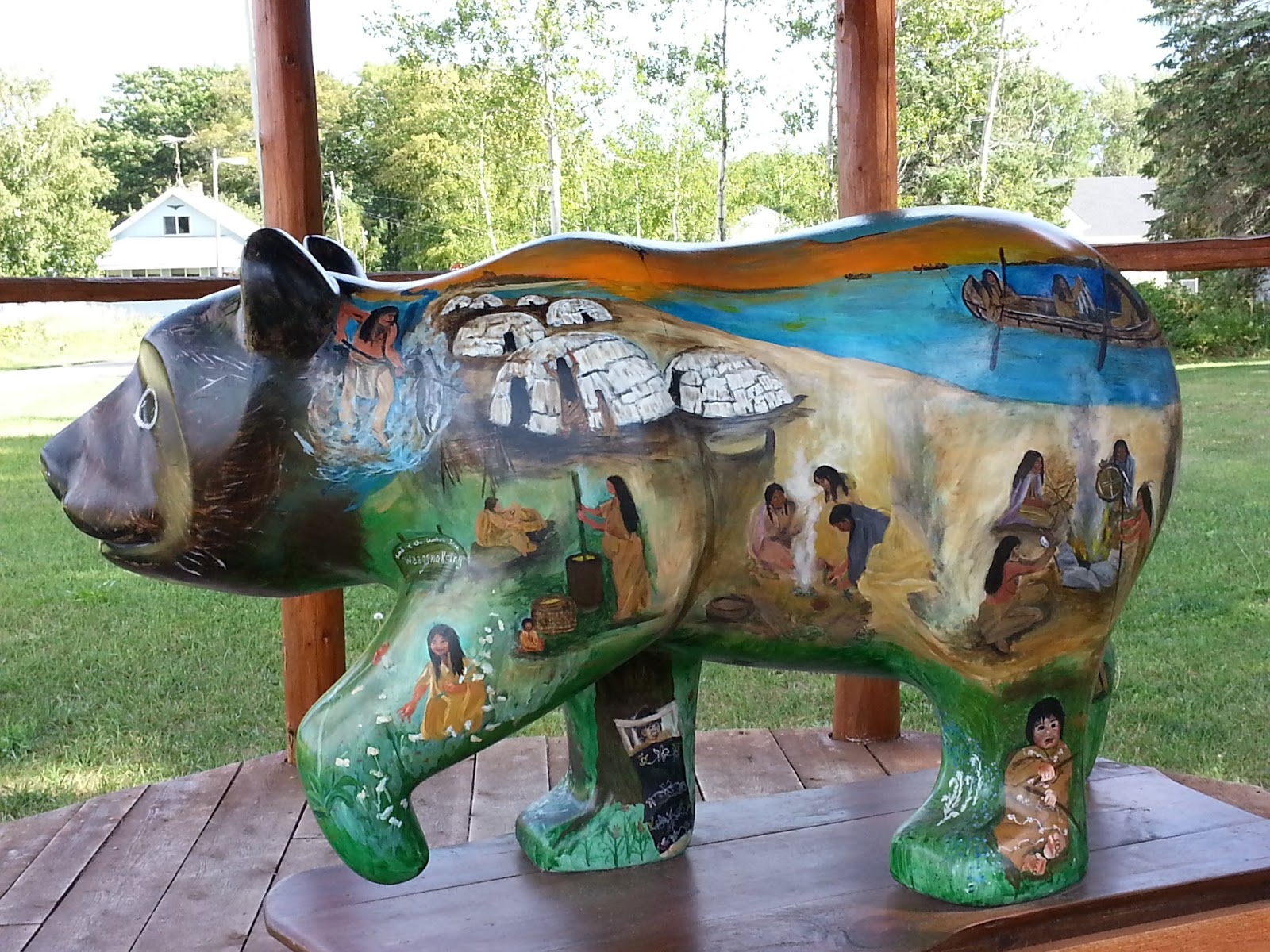 After Charlevoix, we were amped. The next part of our Lake Michigan Circle Tour route was the "tunnel of trees" which is a quiet, albeit well paced road surrounded by incredible houses and lakefront views. What we didn't know was that we'd be in this rural wilderness for the rich and famous for miles upon miles.

I watch my gas gauge closely whenever we ride. I knew it was time to stop and ask about the issue. Five photos above represent that stop. By the way, the gas station is a 1/2 block east (hahaha). 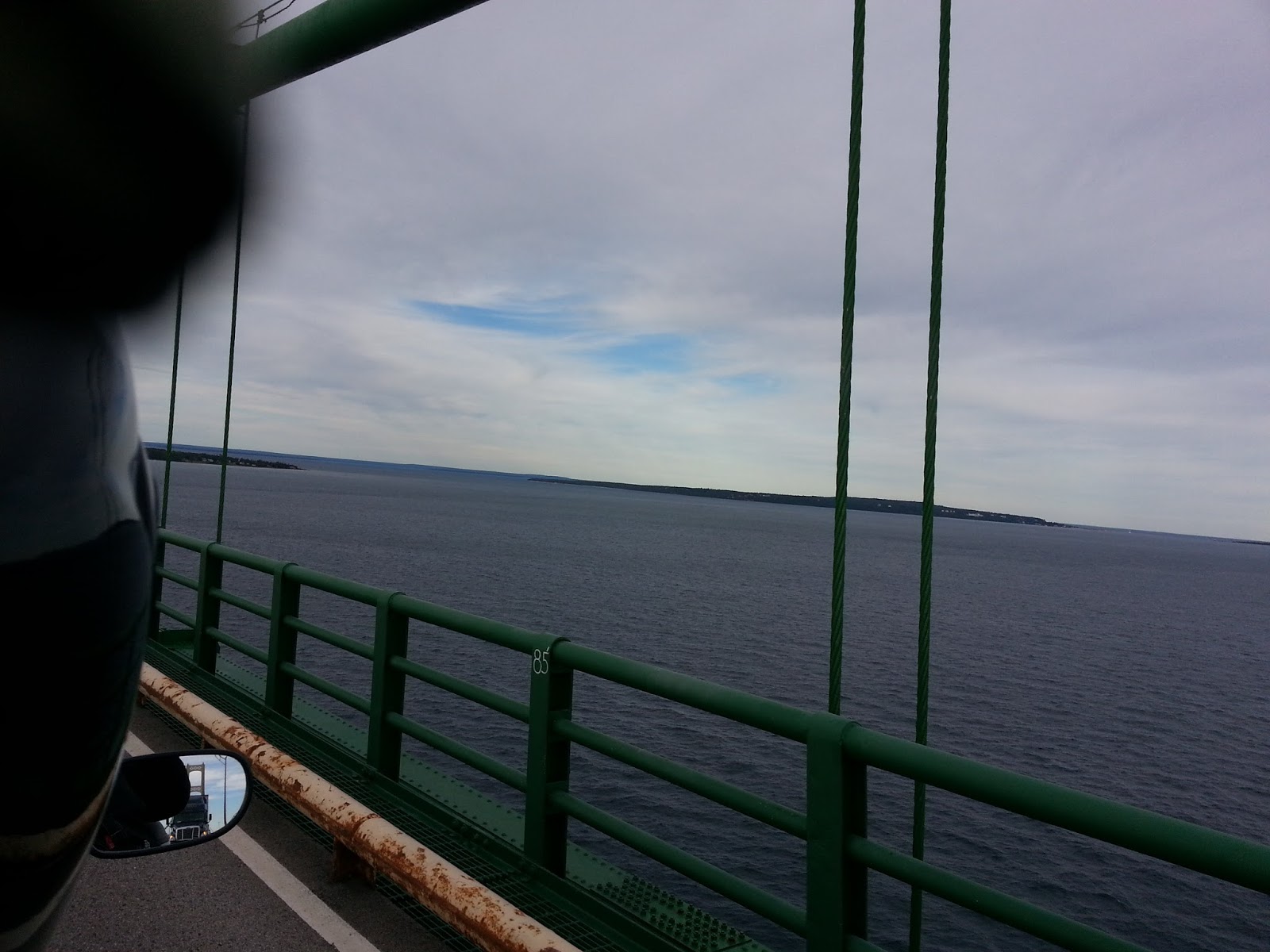 Mackinac Island! The bridge into the Upper Peninsula is just under five miles long. We cradled in between two trucks at 20 mph so she could take these pics. 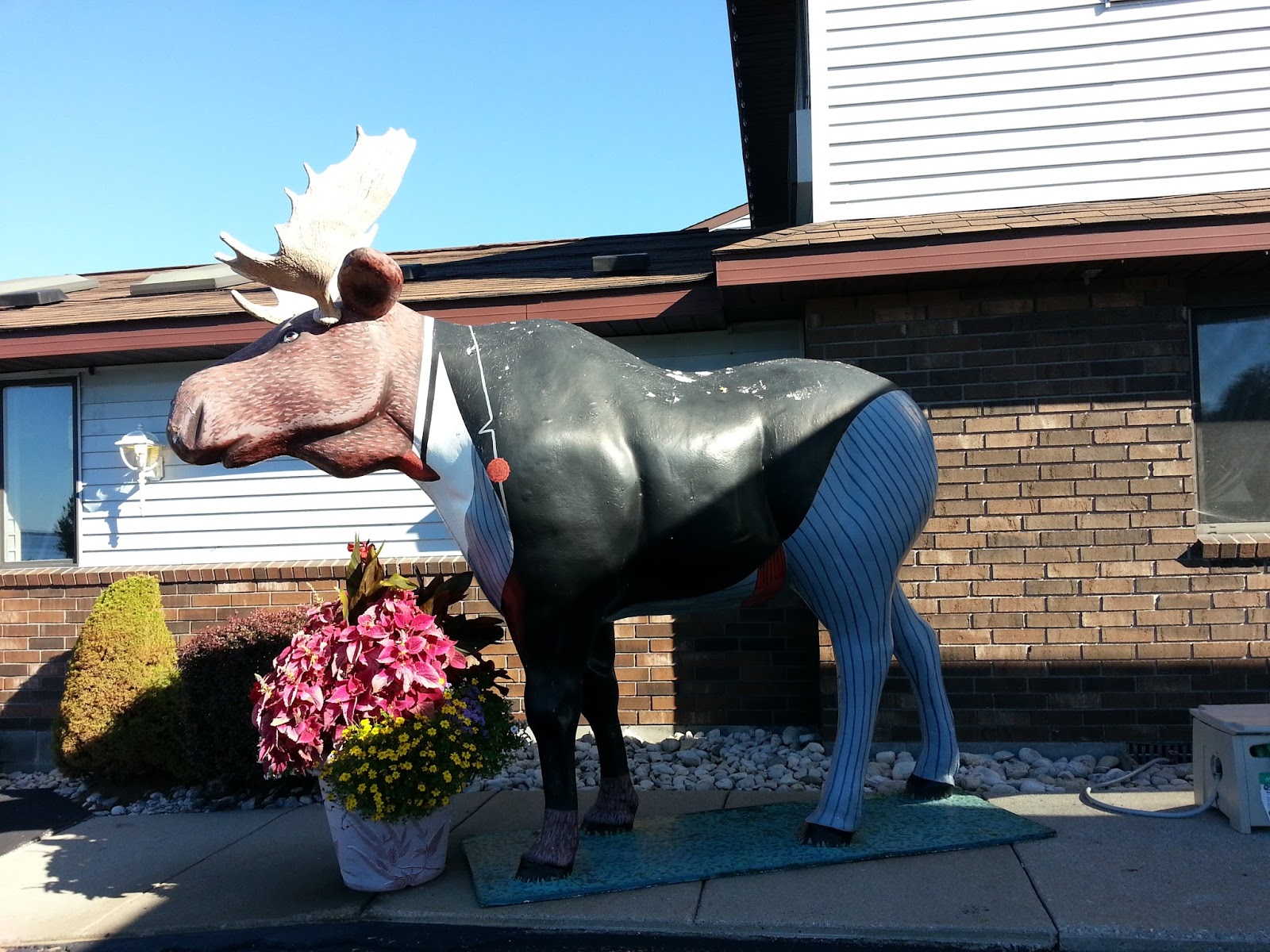 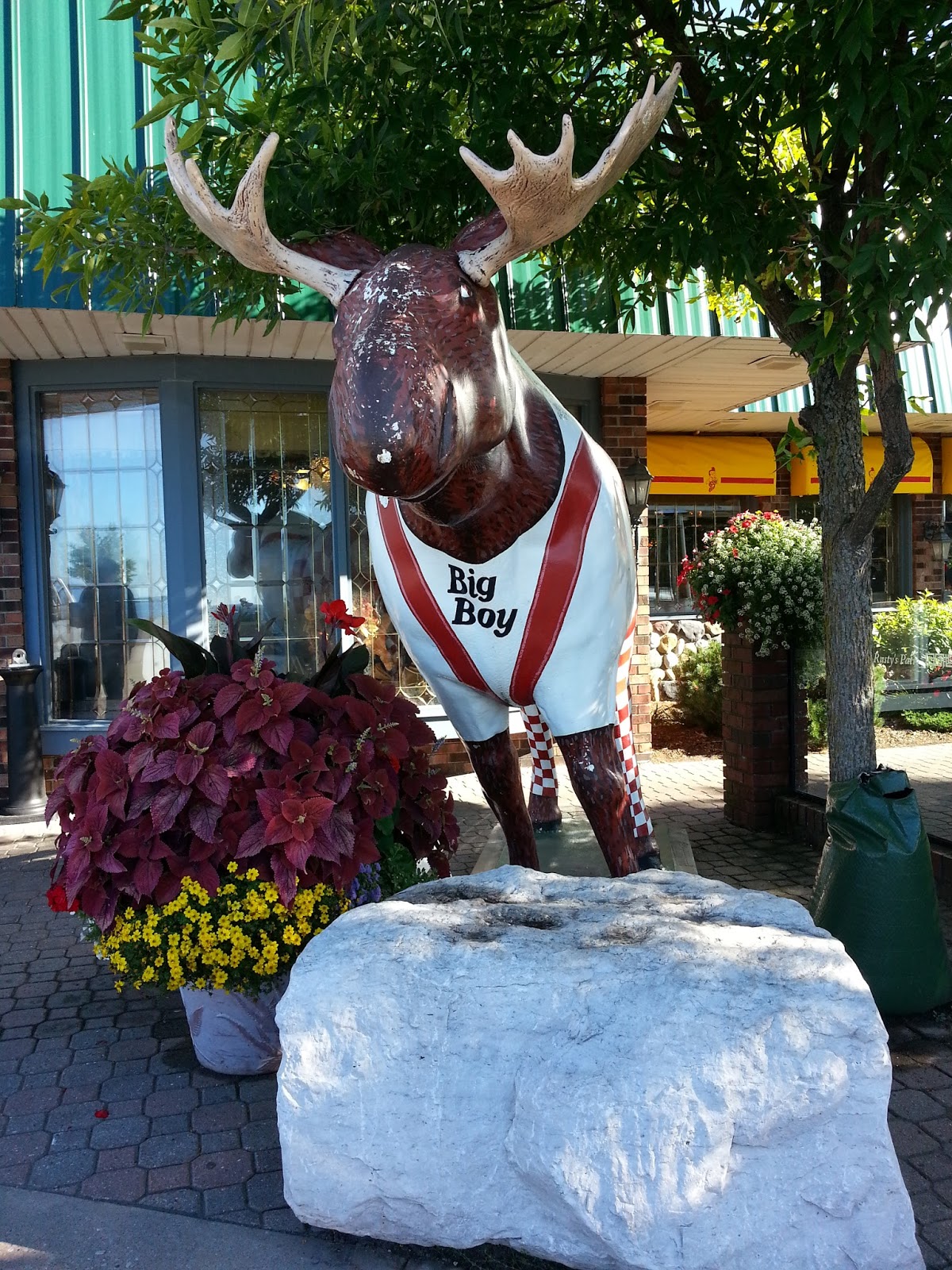 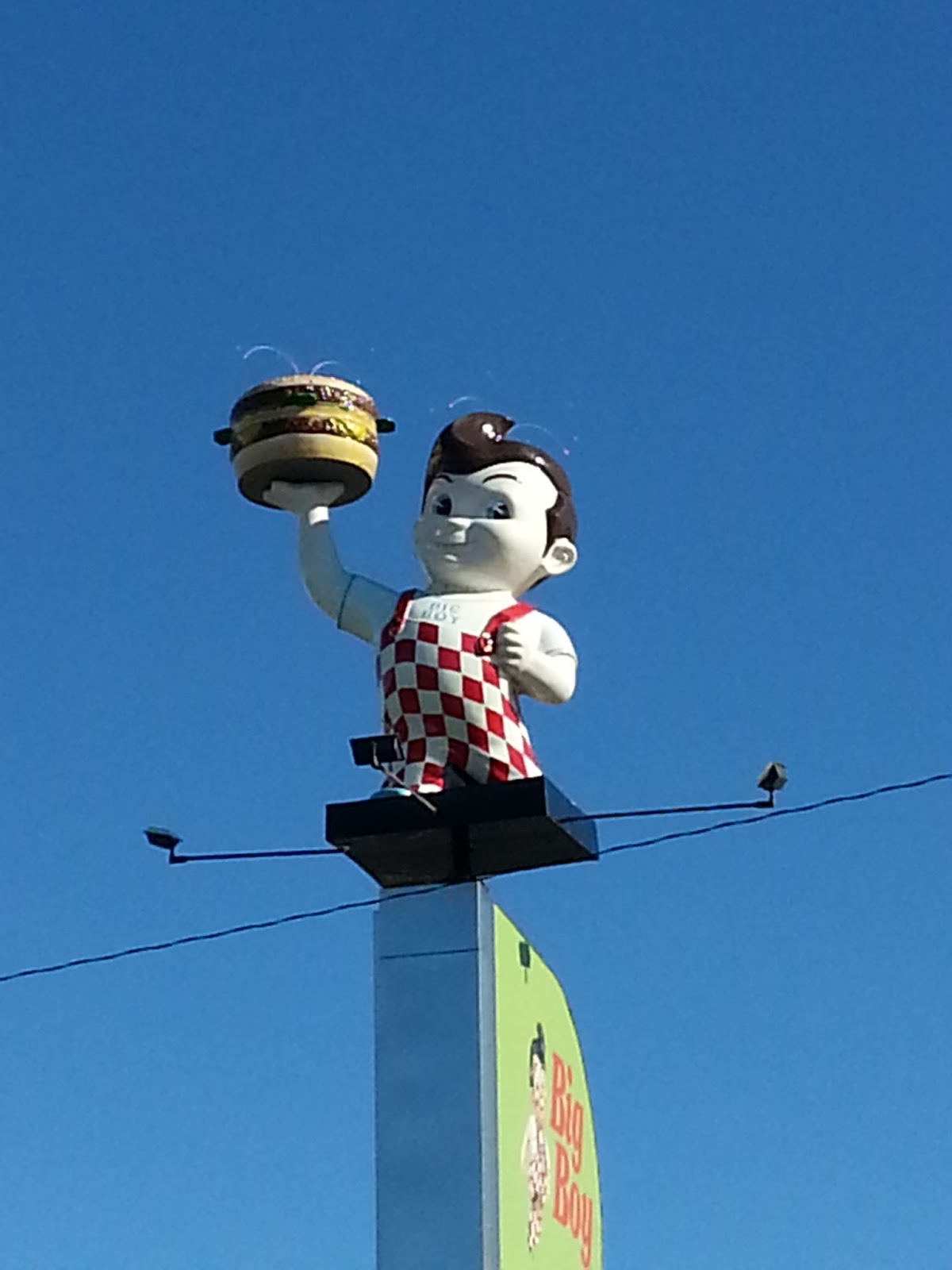 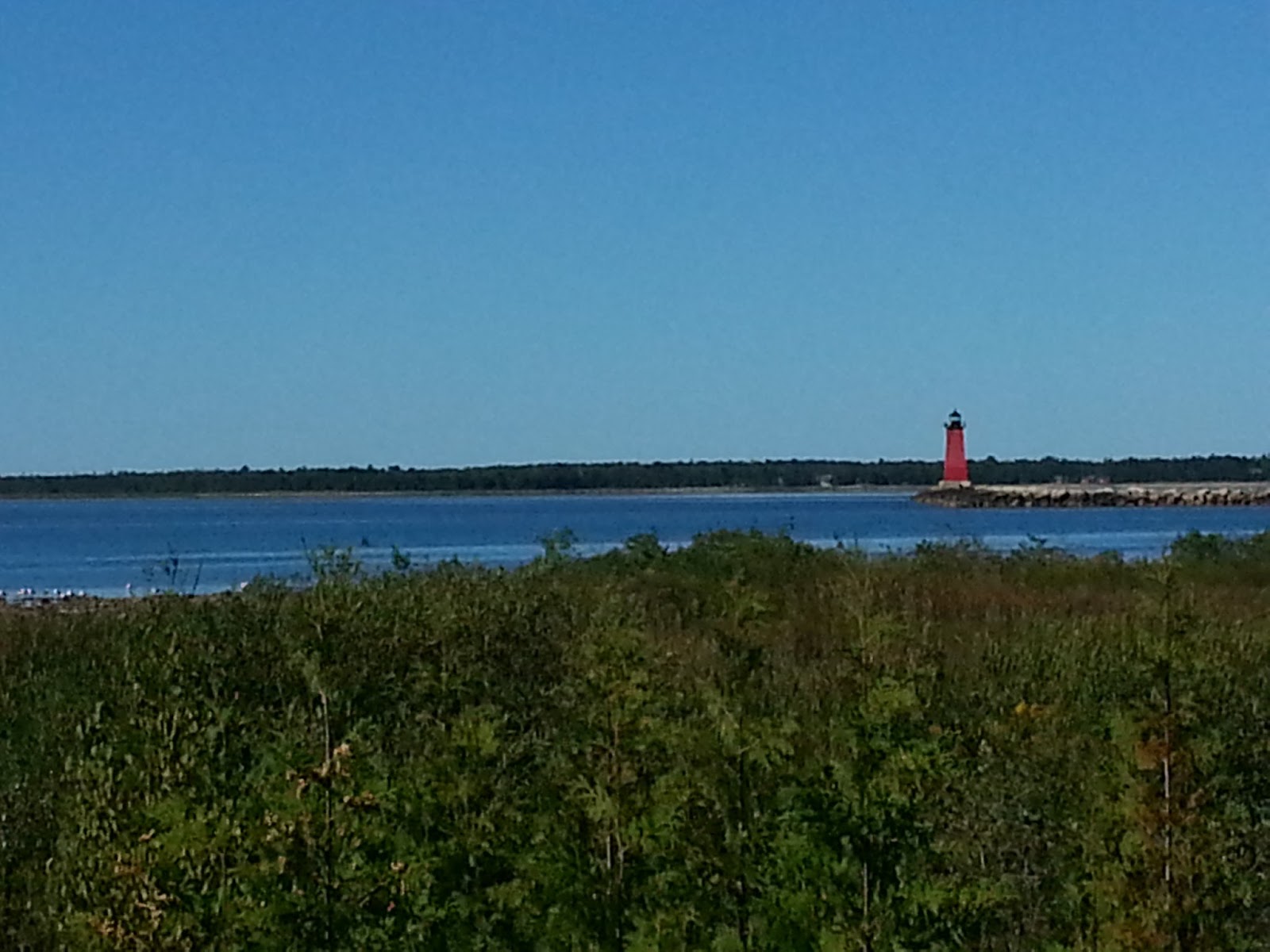 These three pics are from the Comfort Inn mentioned prior. We entered the U.P. the evening before just as the temperature began to drop. Having missed the last ferry to Mackinaw Island, we continued West on route 2, passing motel after motel. Some were seedy, others were posh. Either way, we wanted to see if we could escape the isolation for something more uniform. We got lucky.

The Upper Peninsula was absolutely beautiful that night. The air was brisk and the sky, cloudless, lit up in shades of blue and orange we'd never seen. Those who tough it out there do so for good reason. It's a religious experience to exist in that environment. 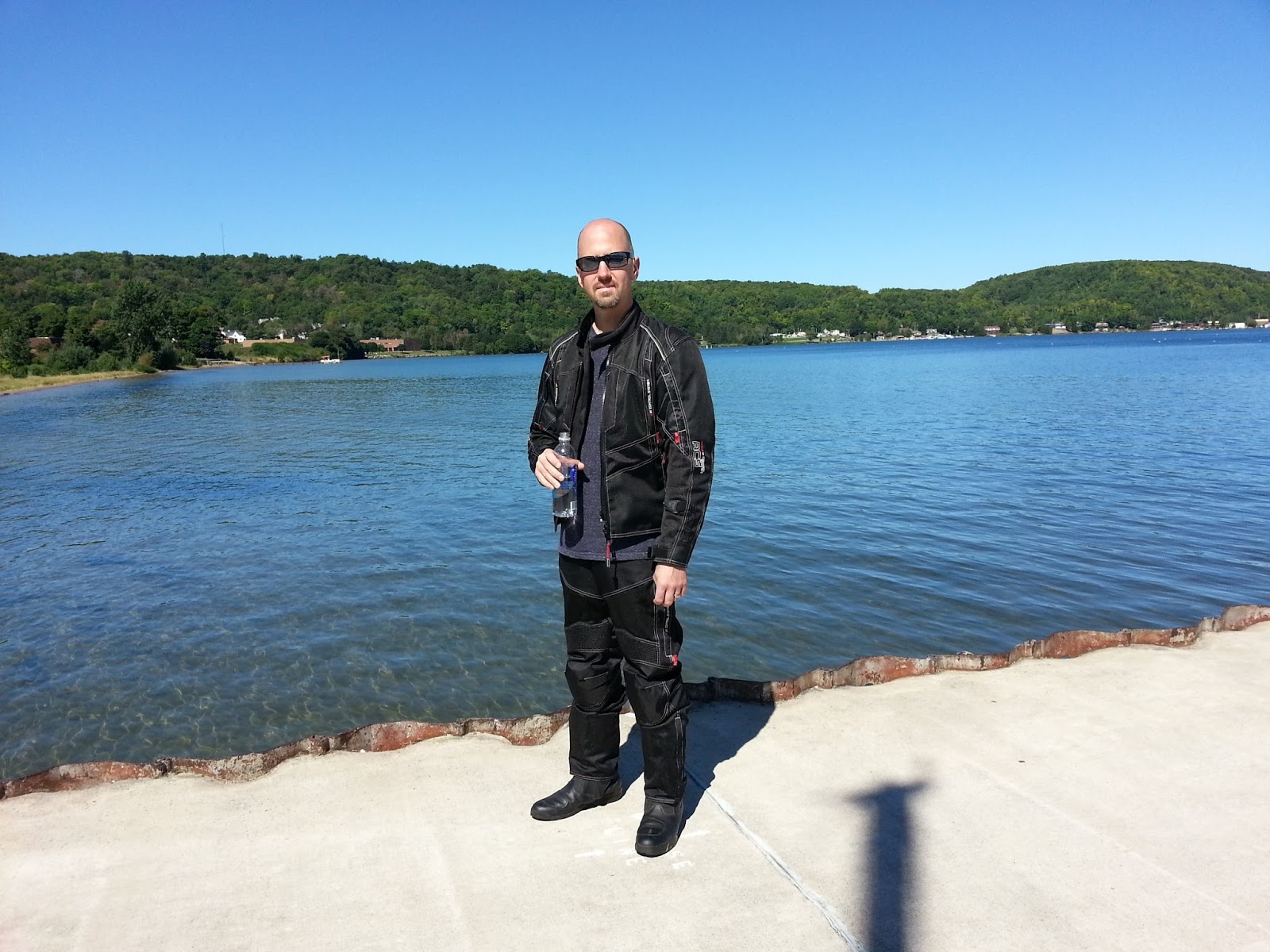 The Comfort Inn is right on the water, with a lighthouse to the West. Our trip continued through Wisconsin along some of our favorite roads. Each stop, well worth it, didn't take anything away from the curves ahead.

What Are Your Favorite Stops Along The Lake Michigan Circle Tour?

There are many great places to visit while riding this route in particular. Which ones do you prefer most? What do you like about them and why? Your input is invited. Post An Article!

On your Calendar there is a Great Lakes Tour but no information about it. Are there details of that somewhere or is it not a group ride?

The wife and I just started planning it. An organized effort "shall commence" this weekend. I figure we'll kick preparations off with two very basic slab routes (expressways and alternates). Once we have those in place as "behind schedule" fallbacks, I'll dig deeper, plotting scenic and twisty options (our preferred default).

One consideration we're faced with is Canada. We *could* stay within the US for the entire trip but clockwise from Chicago and across the top of the border might be more efficient. I'm undecided.

More important than anything are scenic, spirited curves that are free from guardrails and painted lines yet remain just within society's boundary for gas, food and lodging.

As we continue to develop the site and find our rhythm, more information will be made available.

Ideas and suggestions are welcome.

I just rode Lake Superior in June. Riding it clockwise is best because you're on the lake side lane and the sun is to your back. Thunder Bay to Sault Ste. Marie is amazing. The scenery is fantastic. Me and a buddy rode that trip starting and ending in Iron Mountain, Michigan for five days (4 nights). If I was to do it again, I'd take six days instead (five nights). It felt rushed and I prefer a more leisurely pace. Lake Huron is next! Thanks for the Lake Michigan route! Ride safe.

Great info, Kayle! Thanks for sharing. I might just have to see some of those roads for myself :)

If and when you do any further riding, feel free to contribute and article and we'll publish it here on the site.