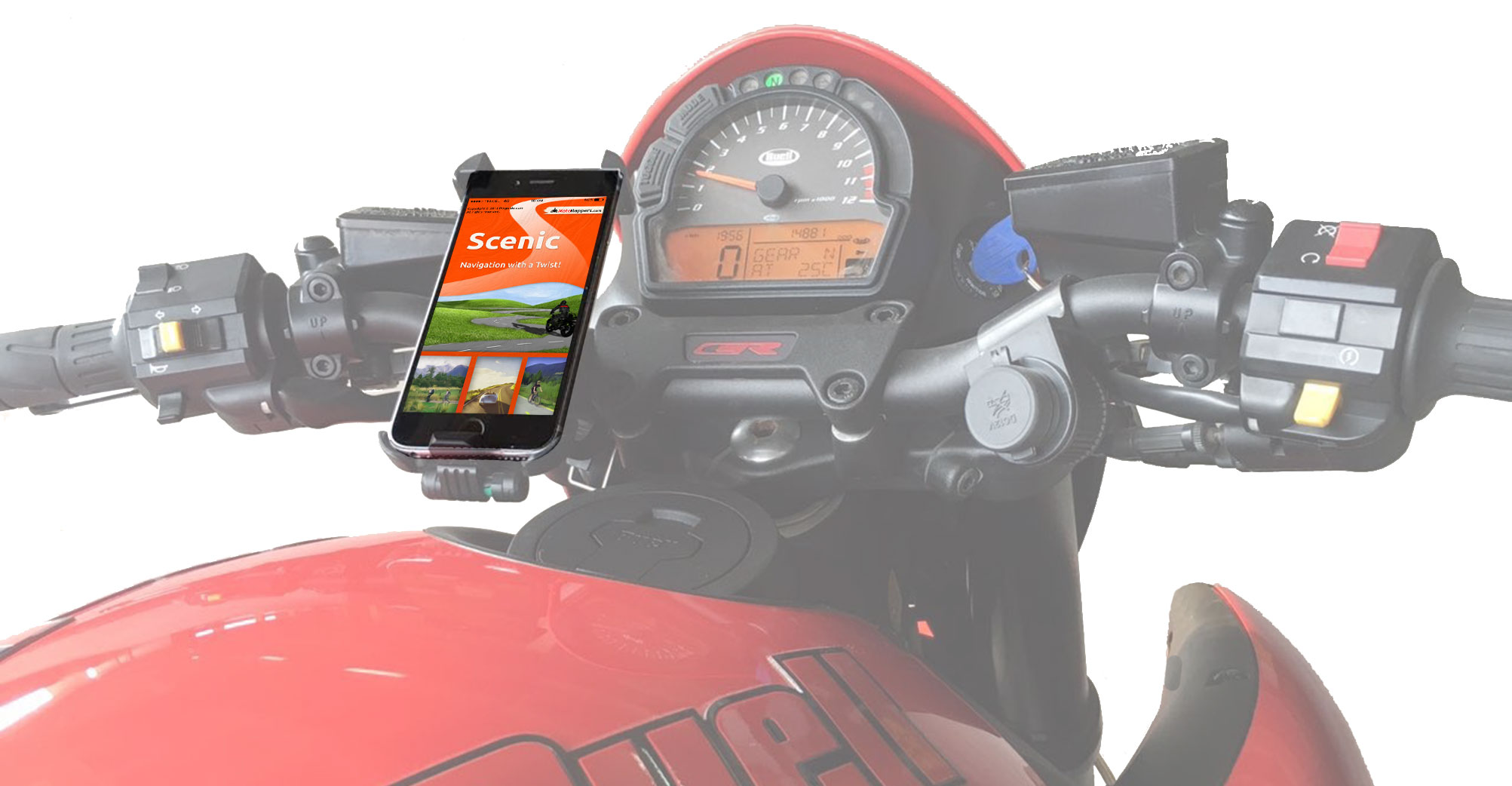 I'm writing this post off the cuff, on a whim and in the moment. The headline above is based on the preview text I read via my gmail inbox, written by a friend with whom a particular discussion remains constant. Which apps, for which platforms, allow riders to import preplanned routes in GPX format before delivering turn-by-turn, voice guided navigation?

For Android, we've already pledged a certain dedication to the open source OsmAnd. It's a fantastic app, albeit a little wonky in it's early stages. Time's been good to it as it continues to develop for the better but the Apple platform has (as far back as I can remember) failed to answer the call. Their known corporate mentality regularly screams "You don't actually want what you want. You want what we advertise. Join the borg." and quite frankly, I'm pretty tired of such marketing hypnosis.

So, when I read about "some guy on the V-Strom forum talking up an app for iWidgets called Scenic", my interest was immediately peaked. I've yet to explore it, hence my introductory sentence. Let's see if I can convey a new user perspective well enough to detail it's features.

Using the search icon (bottom right), I begin typing in the word "Scenic" which then leads to a pre-filled "Scenic - GPS Navigation, Route Planning and GPX Tracking for Motorcycle, Bicycle and Car touring" visual mouthful which translates immediately to "this is exactly what you're looking for" and leaves me skeptically optimistic. Of course, selecting this option presents me with a "loading your selection for the rest of eternity" spinning icon, so let's just go ahead and restart the phone. Another hair in my goatee just kicked grey.

Fully rebooted, I repeat the above and see a "get" button. That's simple enough, though I do see that map downloads for the app are likely going to cost. Scenic Map USA lists at $14.99, so that's either a collection of offline map images or the pro version.

All joking aside, it would appear that the app's developers are catering directly to the specific interests of motorcycle riders everywhere. Once installed, loading the widget unfolds a map using your general location. Now it's time to see if we can get a GPX file going.

Of the five current icons from left to right, top to bottom, I can only assume I'm seeing options for a profile, general settings, "go to my location", customizable favorite locations and ... what's this? To the bottom right? That appears to be a marker-to-marker icon. Fingers crossed. 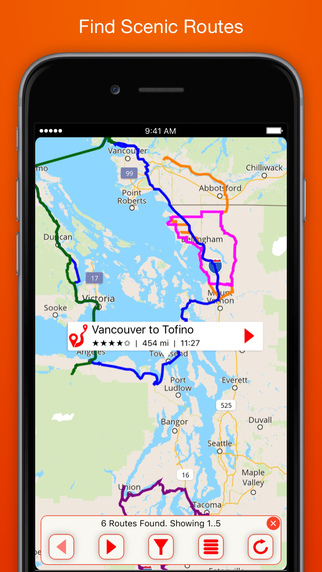 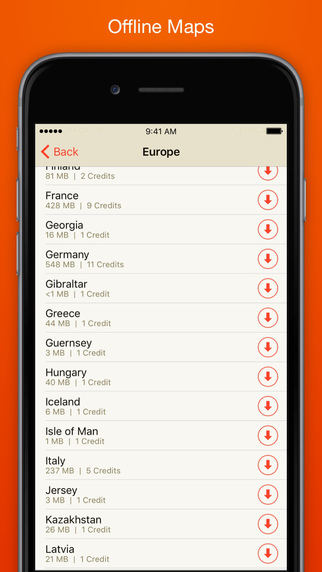 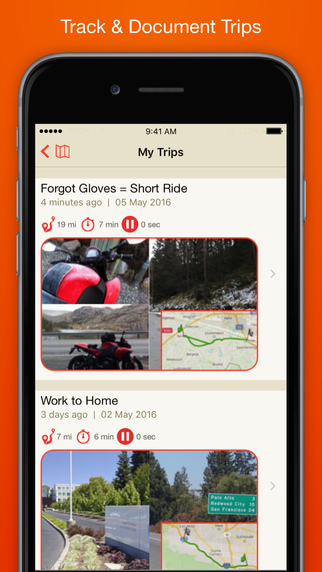 Regarding routes, I can find, favorite, create, import and even stack "my trips". It all looks quite promising. Selecting "import" just to test, I can either grab a GPX map using a direct-to-file url or "from another app in 3 steps".

Even if the latter option weren't less than ideal, I'm thumbing it like a finger piano and nothing happens. I suppose my options are actually to grab it from a URL or "Ha! Fooled you!" to which I'm expressing a few of my own more aggressive hand gestures.

You'll be shocked to know that typing a url directly into their import box isn't as fun as it sounds. Opting to text the url from my Android to her iPhone is easier. Now to paste and retrieve.

Why there's a countdown clock to process my GPX file is anybody's guess ... but okay. Now it's onto the "buy our premium version" message. Apparently I'm allowed five app use "credits" total. That's plenty generous and if the app performs, I'm likely to buy the full version. Continuing on, it reduces the total waypoints to only those which are necessary ... a maximum of one hundred(?).

At this point, I'm impressed. I might read as snarky but let's not forget that my preferred OsmAnd for Android is chock full of laughable quirks. This app has less hiccups and it's presentation is Apple-grade "glistening" in terms of fonts, images and GUI.

I'm not done importing yet, however. I still have to press "save" after confirming all is correct. To test things out, I'm using one of my five credits under "pay as you go". It then asks if I'd like to make the route public ... heck no! I'm ridin' solo today and want everyone off my roads! 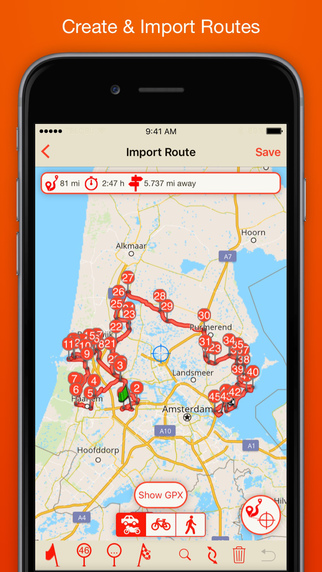 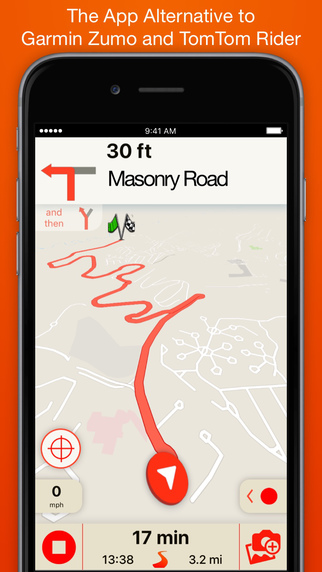 Opening it after the fact before tapping and selecting "navigate" is easy-peasy. I'm doing this from a desk, though so I've no idea if the navigation is actually working. We'll test that soon.

In trying to load the newly imported map from my favorites menu, my only options are to begin the editing process or view the route without navigating it. I guess I'll need to read through the instructions after all. Message to the developers ... access to custom routes should be straight forward and your current video demo doesn't highlight screen taps.

Nine hours has gone by. I've been wrenching on the Bandit and dropping off Hawk GT parts for painting. My focus is returning and my mind is clear. Surprisingly enough, I see in the video above a glimpse of what I have to do to navigate my saved GPX file, listed under "favorites". It's more obvious than before ...

Finally! iPhone users can import and traverse custom routes in GPX format complete with voice guided navigation. Riders have been waiting a long time for this, Mrs. Dean included.

Of course, there's always room for improvement. The one hundred waypoint limit, for example, doesn't make any sense. Many of the routes on this site have far more, which means importing them into Scenic might alter the guidance somewhat. A five thousand mile ride between Chicago and Portland might get a bit hectic in it's detours. Also, I'd prefer a green "Navigate" button.

Either way, keep up the good work, MotoMappers (and more specifically Guido Van Eijsden?). You're providing a great service to the world of motorcycling via custom voice guided route navigation in the iPhone universe. For this, we here at The Riding Obsession tip our hat.

What IPhone GPX Software Have You Tried?

There are other GPX friendly apps in the iTunes store. Which ones do you prefer? What do you like about them and why? Your input is invited. Post An Article!

Good Shoes For Riding Motorcycles
Navigating Life And Loss On A Motorcycle
The Best Motorcycle Insurance Companies
The Best Times To Ride A Motorcycle
Slip On Carbon Fiber Can Exhaust You
Yes, It's Fast And No, You Can't Ride It.
Cold Weather Gear: Your Ride, Your Terms
Used Motorcycle Values (A Buyer's Guide)
Motorcycle Camping: A Pandemic Vacation
The Best Summer Motorcycle Jacket Is ...