Be it pavement, chip seal, gravel or dirt, road surface means everything to the rider. Our preference may shift with bike choice but we still want whatever's under our wheels to be predictable. Being a sport touring hub, this article takes aim at the garden variety, curve carving adrenal junky who's all too familiar with how much torque their gluteus maximus can apply full clinch.

“There's loose chip seal in the next corner. The road surface is otherwise perfect. Relax the shoulders, elbows, hands and fingers. Carry on.”

A bit of back story on my road surface inspiration: I was making an umpteenth journey between family in Asheville, North Carolina and TRO headquarters in Pikeville, Tennessee. The route guarantees massive grins, especially during bouts with the curvaceous Cherohala Skyway. At its western end, there's a change in pavement material, lighter asphalt turning to a dark, charcoal blend.

On this day, warning signs alerted me to fresh oil, so I knew I'd crossed into chip seal territory. Loose gravel warnings soon followed, so I rolled off the throttle as needed. My next move was to trade lean angle for body posture, keeping the bike upright while minding my breathing patterns.

None of this was out of panic. Part of my point is highlighting I've done this more times than I can count. It's at the start of such things that experienced riders choose methods and mindsets.

But this particular section of the route, on this particular day, was keeping secrets. Entering the tree line, shadow and road surface were plotting against me. What appeared to be minor crowning was actually a five inch recess full of pooled chip seal.

By "appeared to be", I'm suggesting that even a rider with 20/10 vision stopped beside it would believe it to be level, uniform and fully cured macadam. It wasn't. Stitched in serpentine form, it stretched diagonally across the center line toward oncoming traffic.

The front end of my motorcycle stepped out significantly further than expected. I was already travelling ten miles below the speed limit (opposite my usual, um, speed limit ... yeah, that's it) so the dramatic exaggeration of this effect felt reeeally awkward. Chopped asphalt, collected in a perfect, foot-wide path from lane position three to the oncoming median, was more than I bargained for.

Note: None of the media on this page is from the Cherohala. I didn't have my camera with me that day. These examples came from our NM tour. 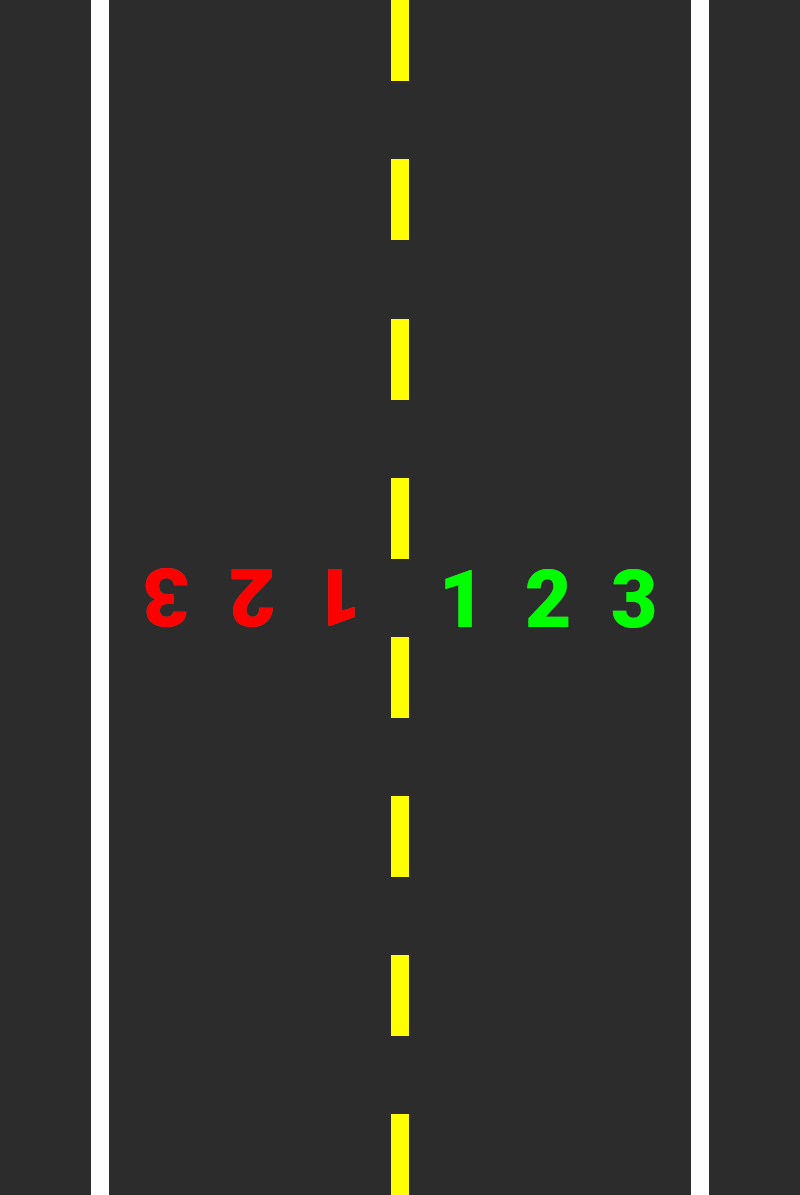 My subroutines worked their magic. What subroutines, you ask? Whatever maintains my calm while following through on a committed action with as little force as possible.

She danced like a show pony all the way into lane position one before self correcting at a forty-five degree angle. No high side, thanks to muscle memory not muscling anything at all. This sudden act of inaction, all while keeping focus on the task at hand, without a change in heart rate ... that's what could use some documentation, so here we are.

Training The Subconscious For A Road Surface Shift

Fight or flight is a wild physiological reaction. At its core, a small child waits, eyes closed, hoping luck will intervene. Fight, flight and the "kid" are better left behind in favor of experience and wisdom but ... how do we get there?

Without having clarified circumstances at the end of the Cherohala, my entire analogy leaves an open mic begging for some yawning MSF RiderCoach to ask all of the usual questions:

Based on my details, I did everything right. That lands the answer to number one squarely on "don't throw a leg over the bike", the other questions rendered moot. RiderCoaches also know negative events don't always point to the rider. That's why we suggest riders build a good risk offset in the first place.

No Matter The Road Surface, Keep Your Cool

Mine were no ordinary circumstances, or were they? Perfectly blended pavement presented an optical illusion. My take on signage triggered counter measures, beginning with "keep calm and carry on".

The true surface wasn't in my math. That "relaxed and ready" safety buffer held its own, absorbing all available space only to eventually run out before regaining stability at the last moment (lane position three into lane position one). It's a rare, bizarre fluke where, while I wasn't riding anywhere near my limit, I found myself arriving at it.

My headspace shrank only after I adjusted methods/mindsets to better suit conditions. As riders, we work with what we know. Sometimes, what we know is just enough to save us from our own lying senses.

Before my tires entered the loose chip seal, plan "A" was simple. I'd ride using the same techniques as always but well below the speed limit, with less lean angle and a heightened state of awareness, especially where bike response is concerned. As the front wheel sank in, plan "A" buckled, offering the exact time needed to execute a subconsciously preloaded plan "B".

Plan "B" did the job but used all of my remaining space cushion. If the road surface handed me a dessert menu, that wouldn't "B" enough. Let's just say plan "C" is that little bottle of hot sauce your uncle keeps in his coat pocket to jazz up lasagna at roadside buffets.

Plan "C", a last ditch effort, is fueled by the same energy as fight/flight with a dash of reckless abandon. The difference? It too is conjured by wisdom, experience and focus (sort of).

With those three character traits in play, plan "C" gets called off the bench without us knowing, all while we're executing plan "B".

Plan "C" in my case could also push the big red "when in doubt, throttle out" button but the scattered nature of my surface conditions weren't good for that.

It's worth mentioning that even our calmest in-ride state amps up the senses to millisecond speed. Recognizing a threat then multiplies that exponentially. The rabbit hole goes deeper for every fallback plan we employ.

So if you ever find yourself facing plan "C", welcome to your world in picoseconds.

Know Your Bike's Geometry And Behavior

A body in motion tends to stay in motion. The more we know about our motorcycle's powerband, throttle response and weight distribution, the more Newton's first law works in our favor. That powerband doesn't necessarily have to come from a motor, either.

As a child, I remember riding my BMX bike, fast as I could, jumping off at a main straight to see how far it would roll by itself. Sometimes, it'd make it deep into a neighbor's yard, despite hopping ditches, gravel pools and exposed tree roots. Its path would correct itself even if it launched well over two feet in the air.

This speaks to how a relaxed and well tested plan "B" dials us into the bike's broadcast so we aren't nervously arguing with physics until it's too late. And plan "B" isn't always reactionary. It's more of a constant, or a wave we ride, the same wave that lets kids wheelie their BMX bikes home from blocks away before posting a perfect stoppie.

All because they know the exact wheel rise, handlebar pitch and body position to do so. Not by pre-calculation, either. It all comes from practice, then feel and eventually instinct.

When approaching open-view curves with (limited) gravel, I'll often ride through it to practice plan "B". The term "limited" is rider dependent, for me being somewhere between scattered bits and a 2" pool that's one foot wide by however long. Balanced at the throttle, suspension in its default state, the bike responds to its own physics before we respond to the bike.

The short of it is that gravel, grass and soft surfaces aren't a threat in and of themselves. It's when we, the riders in motion, try to force a bike to recover from its own inertia over top of them that trouble begins. Regular practice is what lifts our skillset from "mother pucker!" to second nature.

Our fine tuned observation skills stand to benefit as well. That ability to see every item on a road's menu through multiple curves while connecting the dots, keeping our ride smooth and balanced ... absolute gold. One example is tar snakes, which today bother me exactly zero.

I'm not suggesting that I ignore them. I observe them and adjust accordingly but overall, there's little change to my pace/demeanor. The pavement in between brings it all back together every time.

Forgive The Illusion (Leave That Road Surface Behind)

Some riders will say we should never have a pucker moment or that if we do, it's always our fault. They're wrong. No matter what hazards we encounter or technical response we resort to, there are situations where things simply aren't what they seem.

When the effects of these events take hold, and assuming our ABC's have rocked their due diligence, the aftermath can drown everything you do in voodoo. Mental contamination will ruin our ride if we don't recover from what startled us. Chock it up to "nature of the beast" but next time, our nerves will be better prepared if not completely unphased.

Besides, the rule of thumb is to only ride the road we can see, meaning what's around that next blind corner may as well be a brick wall. Having made it through an unexpected event, the unknown new is still waiting up ahead, once again requiring a calm, assertive focus. So ... snap out of it!

Check yourself and ask: am I relaxed enough to keep things smooth at my current pace? If the threat is long gone and your pace is wavering below your norm, a roadside break may be in order. Fuel up, maybe eat or just crank out a dozen long deep breaths.

Clarity of mind makes for better assessment of what's ahead. When what's ahead gets cloaked, well practiced backup plans are of crucial importance, even if they involve resisting the urge to act physically. Having a steady throttle, hands secure but loose at the grip and balance at our core, all while committing to an initial action even when the road surface changes ... may very well be all that's needed to keep your wheels rolling.

How Does Your Motorbike Handle In Random Chip Seal?

There's more than one way to let your bike disco dance. Which techniques do you use and why? Your input is invited. Leave a comment!