HomeArticlesModificationThe Effects Of Ethanol On Motorcycles

Ethanol's a wonderful thing. The drink sitting next to me would be far less enjoyable without it. If, however, world leaders were to mandate that all drinks prepared from this day forward must include at least 10% ethanol, well ... society would be different to say the least.

For those of you who don't know, ethanol is nothing more than filtered and refined ethyl alcohol, the same type that's used in alcoholic beverages. As a fuel, it reduces harmful tailpipe emissions including carbon monoxide, particulate matter and nitrogen. Word on the street is that by using cellulosic ethanol, emissions could be lowered by 64% but we'll explore that in a future post (maybe).

“There's no harm or foul in E15 knocking at a city's door. The worry is merely whether we'll have other options when filling up.”

In today's fuel economy, ethanol blends are also aimed at lowering gas prices by reducing our need for fossil fuels. A known problem with this solution is that ethanol doesn't produce as much combustive power as gasoline. This can equate to lower mileage and actually cost more over time.

The E10 mixture of this vegetable derivative was adopted by many fuel distributors over the past few years. The "10" represents an ethanol-to-gas percentage ratio and the powers that be want to up that percentage by 5%. Chicago, for example, just tabled E15 as an enforced standard.

Having only one option at the pump doesn't bode well with pre-2005 motorcycle enthusiasts.

If we're forced to reduce the physical act of combustion down to three words, they may as well be fuel, air and spark. Many already know about this chain reaction. If you're new to wrenching:

“A specific fuel/air mixture exists in combustion motors which balances the amount of fuel being exploded and the oxygenic meal required to feed that explosion.”

Too much fuel in the mix is called "running rich" and is for the most part harmless. Too much air, or "running lean", on the other hand, can cause serious problems. With a motorcycle that's tuned for ethanol-free gasoline, E10 and E15 will most certainly operate lean.

Investigating whether or not your engine is running rich or lean is a simple process. Simply remove your spark plugs and look to see if there's dark soot (rich) or white, chalky powder (lean) on the electrodes. You may as well clean/gap 'em, too.

One of two issues regarding E15 is the way that it burns. Alcohol has a different density and burns hotter than gasoline. This offsets the fuel/air mixture.

The above quote suggests that ethanol mixtures can have a negative effect on supplementary motorcycle parts as a result of higher temperatures. Most motorcycle manufacturers are meticulous about refining the durability of their parts for purposed use only, often releasing better versions of a previously faulty part as the bike's model evolves. Throw a constantly hotter-than-intended engine into the mix and it's no surprise when hoses and gaskets become compromised. 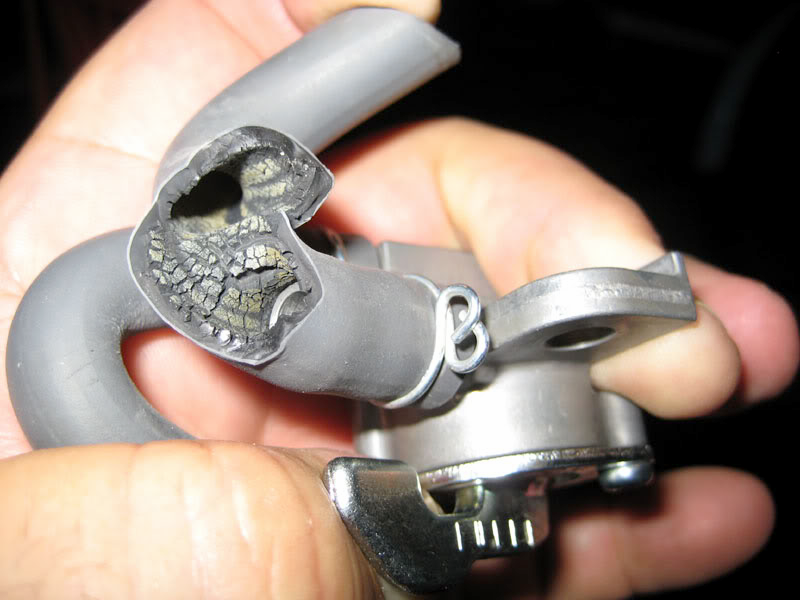 Inside of the gas tank there's another problem. Ethanol absorbs water. While this might initially seem like a good thing (suppressing rust on surrounding metals), heavy condensation will begin the process of water/ethanol phase separation. Gravity then says the water belongs on bottom, right where the fuel outlet rests. If the total water accumulation is greater than 11%, you'll want to protect your engine by draining and refilling the tank.

Two fuel additives in particular are known to slow (not stop) the process of phase separation. The first is Sta-Bil marine formula and the other, Seafoam. Both have different uses but there's a lot of behavioral overlap. The short summary is that Sta-Bil is designed primarily to deal with the condensation issues mentioned above whereas Seafoam also cleans things out (really well). My preference is to combine both into a winter storage cocktail of sorts.

Adapting Your Motorcycle For Ethanol Use

To preserve your motorcycle's general health without major modification, let's look at a few basic steps. First, consider which ethanol blend of fuel is most prominent wherever you live. For long distance motorcycle trips, map your preferred service stations along the route.

Assuming you've predicted which ethanol/gasoline blend is most accessible, tune your motorcycle's fuel/air mixture to suit. In doing so, your motorbike should now run at it's intended temperature. Now we can move on to the fuel line components.

Follow whatever path your gasoline takes between point "a" (tank) and "z" (engine). Itemize each hose line and gasket as the parts transition from one to another. Using your own judgement along with any specifics your manual provides, replace each of the more sensitive parts with it's ethanol-friendly equivalent. Hoses wear out internally. Gaskets may appear dry and cracked.

For the more adventurous, let's rid ourselves of the problem by exacerbating it full-circle. There are E85 (that's 85% ethanol) motorcycle conversion kits on the market. Just typing that gets my geekery gears goin' but unfortunately the kit requires that your bike be fuel injected. Chalk up another reason I can't defend my ownership of a carbureted sport touring bike. Que Sera.

Now, it is possible to convert a carbureted motorcycle over to E85 but it's a "PITA". First, there's the matter of jetting richer. If you were to burn pure alcohol, the fuel/air ratio is max 9:1 at 1 atm (atmospheric pressure). Each rubber part would need to be a fluoroelastomer or other alcohol-resistant elastomer. While doable, the effort doesn't return much of a net gain.

Even the U.S. military has it's hand in the development of alternative fuel motorcycles. Their hybrid diesel-electric two wheeler sports an electric primary drive with compressed ignition as a backup. Apparently the design evolved out of horses having difficulty in harsh desert conditions and larger vehicles either becoming stuck or running out of fuel.

It's hard for this site to represent electronic motorcycles well due to their limited range. We hope that their continued development will arrive at a model that's Iron Butt worthy. The genre's waters are choppy right now. Zero Motorcycles, Inc. maintains headway while the fall of Vectrix gave us our very own DeLorean equivalent. We at TRO tip our hats to the creators of this 750 Ninja.

Learn about other alternative fuel motorbikes via this article on Breaking Energy.

Back To The Ethanol Debate

Combustion in and of itself may not be a part of our worldly heritage but engines most certainly are. In a utopian society, we'd have already found common ground solutions that eliminate our fossil fuel dependencies without mellowing the thrill of riding a motorcycle. Instead, here we are at odds with ill advised, big brotherly regulations that may one day choke out all other options. E10 created enough argumentation. It's likely a safe bet that E15 will only do the same.

There's no harm or foul in E15 knocking at a city's door. The worry is merely whether we'll have other options when filling up. Call your alderman or city official to express your concerns. Better yet, do the same but also ask that they explore greener, more efficient solutions that are backwards compatible. Considering all sides of an argument is the path to resolution.

What Experience Do You Have With Ethanol?

Ethanol-gasoline fuel blends are sold at gas stations everywhere. How has it effected your motorcycle? What changes have you implemented? Your input is invited. Leave a comment!